The Alpine driver was 25 when he earned his second title with Renault in 2006, while Verstappen, who can mathematically clinch his second crown this weekend, turned 25 on Friday in Singapore.

Alonso was asked if a second championship would put Verstappen amongst the all-time greats.

“But I think I'm sure with Red Bull and how the things look for the future he will only get better.”

Alonso praised Verstappen and his team for their performance this year, while seemingly also having a dig at Ferrari’s failure to capitalise on a very competitive car.

"It was not much of a fight, no? It's going to be an important season, because we changed the regulations massively so it's going to be always remembered for this new generation of cars. I think Ferrari had a very, very fast car," he said.

“But Red Bull and Max, they were outstanding. So there was not a fight maybe because Red Bull and Max Verstappen were better than the others. But they didn't have that superior car, because I guess Ferrari is the same, or better.

"It's very well deserved. I think as I said before they were the best team and the best driver by far, so when they win it I don't think is an important thing, it's just they will. If it's here or in Japan, we will see." 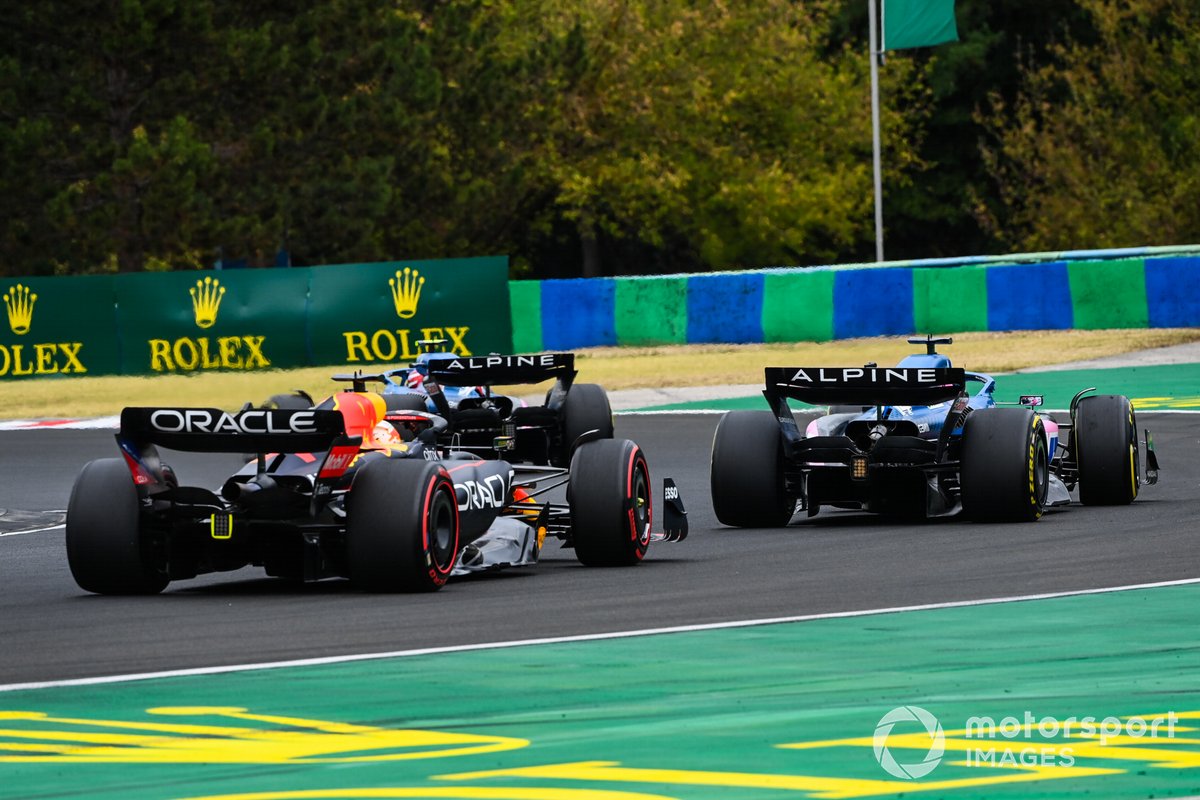 Fernando Alonso tries to keep Max Verstappen behind in Hungary.

Alonso praised Verstappen’s ability to always be quick from the start of a weekend.

"I think you cannot teach that,” he said. “I think it has to come from yourself. There are drivers that they need more time, they need to study more data, they need all the Friday to analyse and compare with a team-mate and slowly make little steps until they are 100%, ready for quali.

“And there are others that they are 100% in FP1. So I think Max is one of those. And has been always like that, from go-karts to now, so it should not be a surprise for anyone."

He also compared himself with Verstappen: "I mean that's probably one, or I consider one, of my strengths. And that's why I stopped F1 in 2018 to try different things because I felt that my career was not progressing just being in F1 10th or 12th every weekend, I wanted to challenge myself in different categories, in different cars every weekend, and try to achieve different titles or race wins.

“I will look with interest tomorrow in FP1, the first five minutes of the session, you will see Max Verstappen will be 2.5 seconds in front of everyone. And then slowly they will come, and then in quali they will be close to him.

“It happens in a way as well as in a small scale also between my team-mates sometimes, that on Friday I'm well ahead and then Saturday and Sunday they are getting better and better.

“So ideally for Max or myself or whatever we will love wet sessions in FP1, FP2 FP3, and go into qualifying for the first time in a new in a new track on this!"

“In F1 you need a bit of luck, and you need to have the luck that you make the right decision and then have a dominant car for a long time,” said the Dutchman.

“Because I mean, obviously, if you would have put Fernando in the cars where other people have won championships with, he would have done the same.

“But that's not how F1 works. At the end of the day, he still won two titles, so I think he's done very well for himself. And he's also a great guy, and a great personality for F1.”