Fernando Alonso says he has “cautious feelings” starting third on the Formula 1 grid at Spa after mistakes in Canada saw Alpine squander a front row start.

Alonso finished sixth in Saturday’s qualifying session for the Belgian Grand Prix, but moves up three places on the grid thanks to penalties for Max Verstappen, Charles Leclerc and Esteban Ocon, leaving only Carlos Sanz and Sergio Perez ahead for the start.

It is not the first time this season Alonso has started so far up the order, after a stunning display in the wet qualifying in Canada gave him P2 on the grid - only to drop back in the race and finish ninth.

“I have still some cautious feelings, because in Canada, we were on the first row of the grid and we did a lot of things wrong there,” Alonso said after qualifying at Spa.

“We didn’t take any safety car, we were very long with the first set of tyres, we had battery problems. The races are on Sunday, not on Saturday. I want to have a clean race tomorrow.”

Alonso has finished no higher than fifth this season, but was not getting ahead of himself despite his advanced grid position, anticipating the quicker cars would recover and ultimately drop Alpine back to its regular upper-midfield position.

“We have strong competitors starting behind, the two Mercedes, they are very strong on race pace normally, and also [Max] Verstappen eventually will come into the podium positions as well,” said Alonso.

“So I think realistically, top five or top six should be our normal position at the end of the race. But let’s see where we are tomorrow.” 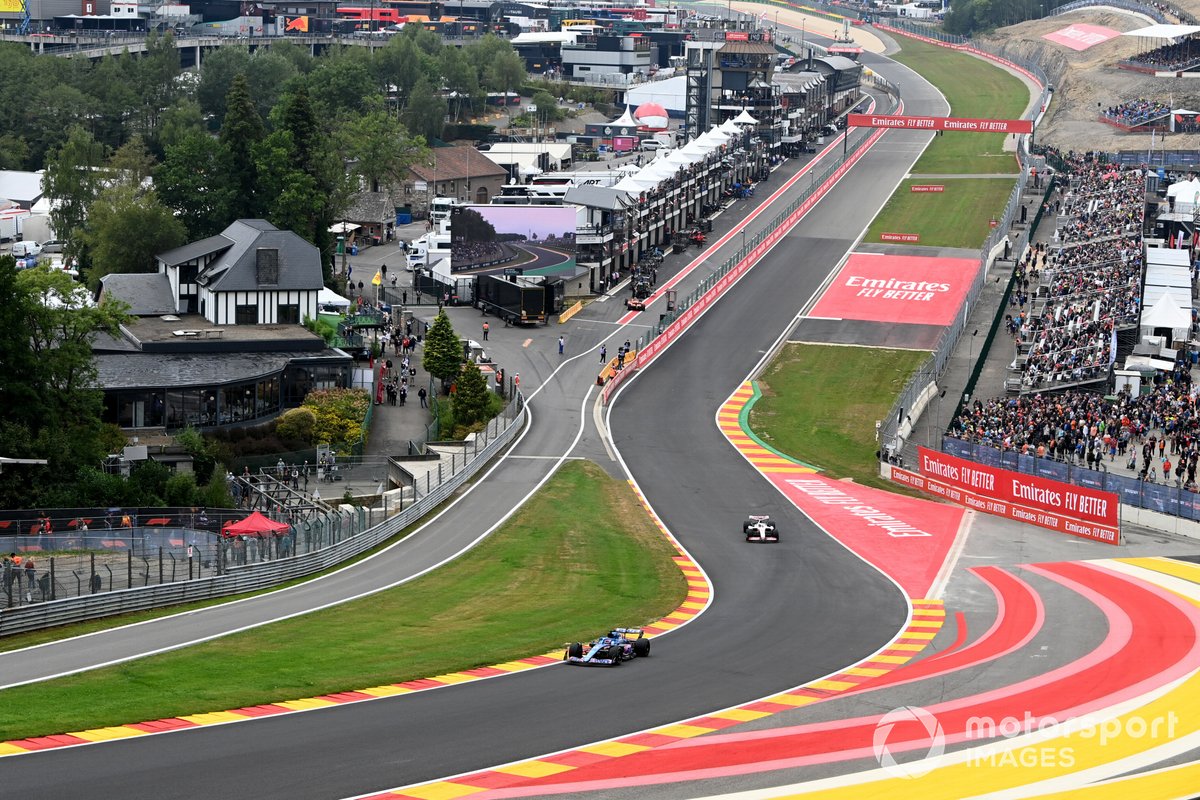 Cars starting off the front row of the grid at Spa typically enjoy an advantage on the opening lap thanks to the tow afforded by the long run from La Source to the end of the Kemmel Straight.

Asked about his chances on the opening lap, Alonso said: “Maybe Checo and Carlos touch in Turn 1, and I have a free way in front of me! That will be what I visualise tonight.”

Alpine team-mate Ocon put in his best qualifying performance of the season by finishing fifth in Q3, but he will start the race 16th after a power unit penalty.

Ocon admitted he felt “really disappointed” to be dropping back as he “knew we were going to be fast” at Spa, but was still hopeful of recovering to score some points.

“We have a car that is fast enough to be able to do so,” said Ocon, who will line up directly behind Verstappen and Leclerc.

“There's many cars around me that are going to be fighting through the field. I can be there looking at them looking at what they are doing, and follow them to come through."