Fernando Alonso has accused Charles Leclerc of weaving excessively during Formula 1's British Grand Prix, the Spaniard saying he expected the Ferrari driver to be penalised.

Alonso was a close observer of the spectacular battle in the final laps of the race between Leclerc, Sergio Perez and Lewis Hamilton as the Ferrari driver tried to stay ahead on hard tyres against rivals on faster softs.

In the end Leclerc dropped back to fourth. He crossed the line just ahead of Alonso, who had jumped Lando Norris at the safety car pitstop sequence.

However, in the immediate aftermath of the race, Alonso was convinced that he would move up a further place as he expected Leclerc to be penalised for making more than one move while battling with Hamilton up ahead.

In Montreal, Alonso was handed a five-second penalty and lost two places for moving while defending from Valtteri Bottas on the final lap, and thus he expected Leclerc to face a similar sanction.

"It was really fun at the end," he said when asked by Autosport about the late race battle.

"And obviously we were not in the fight, but we were just behind, and saw all the action in front.

"We were P5 so I was hoping two cars maybe they touch each other, and the podium was there for us. But in the end they raced very hard, but with a lot of respect. So still fun to watch from behind.

"It was good to overtake Lando at the end, as I said P5 is mega. But even though I have to say it is going to be P4, because I saw Charles moving, three changes of direction on the back straight, defending from Lewis.

"I did it once in Canada and I had five seconds on the last lap, so I guess three movements are not allowed.

"After the race there is always action so I guess today I am not in the stewards, so I will have fun from the outside, I hope."

In the end Alonso, who has regularly questioned how penalties are awarded since his comeback with Alpine, was to be disappointed. There were no penalties for drivers ahead, and it's understood that the Leclerc incident didn't even get as far as the stewards. 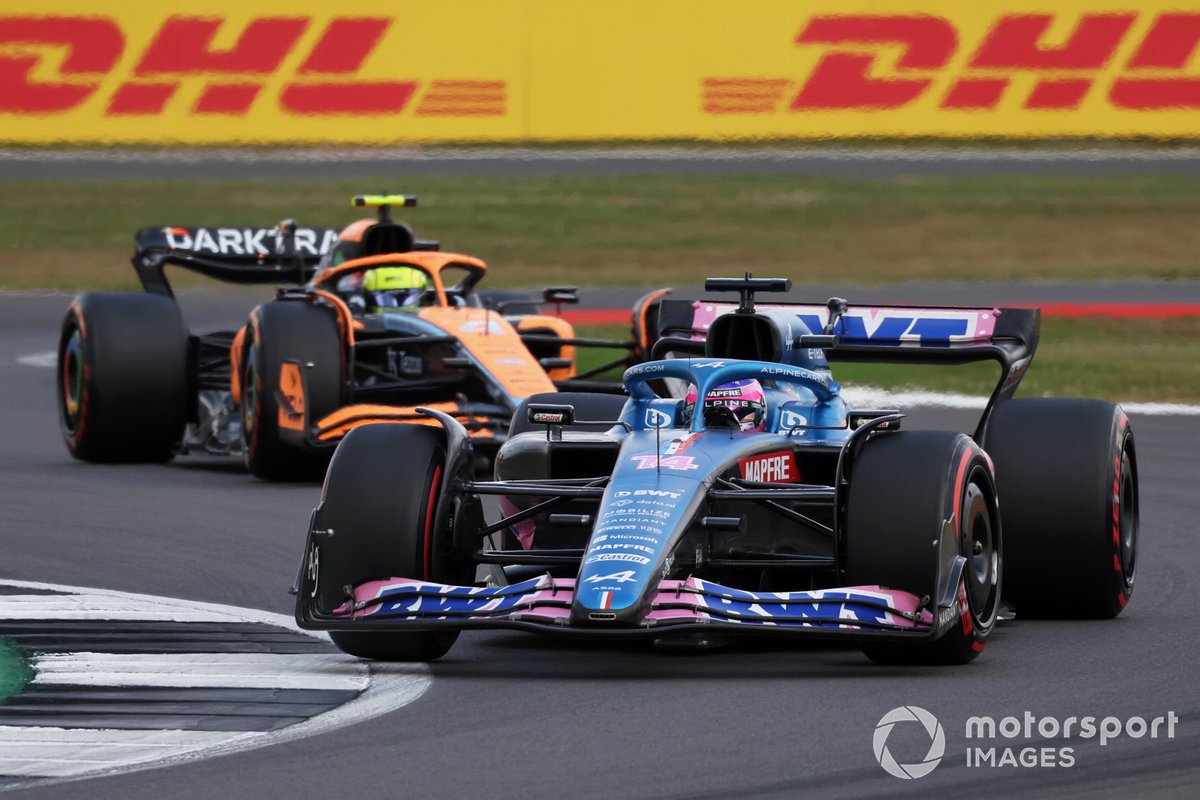 Alonso was encouraged by the progress Alpine has made with the latest updates, especially in terms of the fight with McLaren for fourth in the championship.

"I think the car was very good today," he said. "Let's say compared to any other race I felt more competitive than ever today. We were on the pace of Lando.

"Maybe Red Bull, Ferrari and Mercedes we know they are untouchable at the moment, but I think we were quite ahead of some of the midfield cars.

"So definitely it was a step forward. And Silverstone I know that maybe for McLaren it was one of the best circuits, and I think we were matching their pace. So I expect the next couple of weekends to be quite strong for us."

"Very happy for him, obviously pole position yesterday and race win today, here in Silverstone one of the best places of the championship. It will be a day to remember for all his life.

"So I am very happy for Carlos and Carlos's father, who is a very good friend of mine, more than 30 years that we've known each other. So a day he will not forget, and hopefully the first of many."