Alfa Romeo approached the Abu Dhabi Grand Prix with the intent to "make life difficult" for Aston Martin as the two teams battled for sixth in Formula 1's constructors' championship.

The Sauber-run team claimed the much-coveted sixth place position in the standings, albeit level on points with Aston Martin, thanks to a countback to Valtteri Bottas' fifth place at the Emilia Romagna Grand Prix bettering any finish from either Sebastian Vettel or Lance Stroll.

Having struggled with pace relative to Aston Martin at the Abu Dhabi finale, and a precarious four points ahead going into the round, Alfa elected to sacrifice its own results to frustrate the British squad to preserve its grip on sixth - worth around $10-12m in added prize money.

Although Stroll stopped first of the four drivers, Alfa hence used Zhou Guanyu to undercut the long-running Vettel, while Valtteri Bottas went even longer on the hard tyre to stay out ahead of Stroll prior to the Canadian's second stop.

Bottas explained after the race that his long, "defensive" stint on the most durable rubber was employed to "play with the green cars" and interrupt their aspirations of moving forward.

"I think today ultimately we didn't have that much pace but also my strategy was very defensive so just always trying to be good towards the end of my first stint, and when the green cars come through we wanted to play with them," Bottas said.

"In the end it was too close with the points but I'm so glad we got it.

"[The hard strategy was] to wait for the Astons to stop and come through, and then we make their life difficult."

Zhou explains that the team's stops were also timed to provide McLaren and Alpine with a clearer pit window to stop into to ensure they could come out ahead of the Aston Martins.

Once Vettel stopped and began to make his way back through the pack, the Chinese rookie put up a stern defence to baulk Vettel's progress in his final F1 race.

This ultimately helped to ensure that Vettel, despite his best efforts to pass Daniel Ricciardo at the close of the race for ninth, was unable to finish higher than 10th. 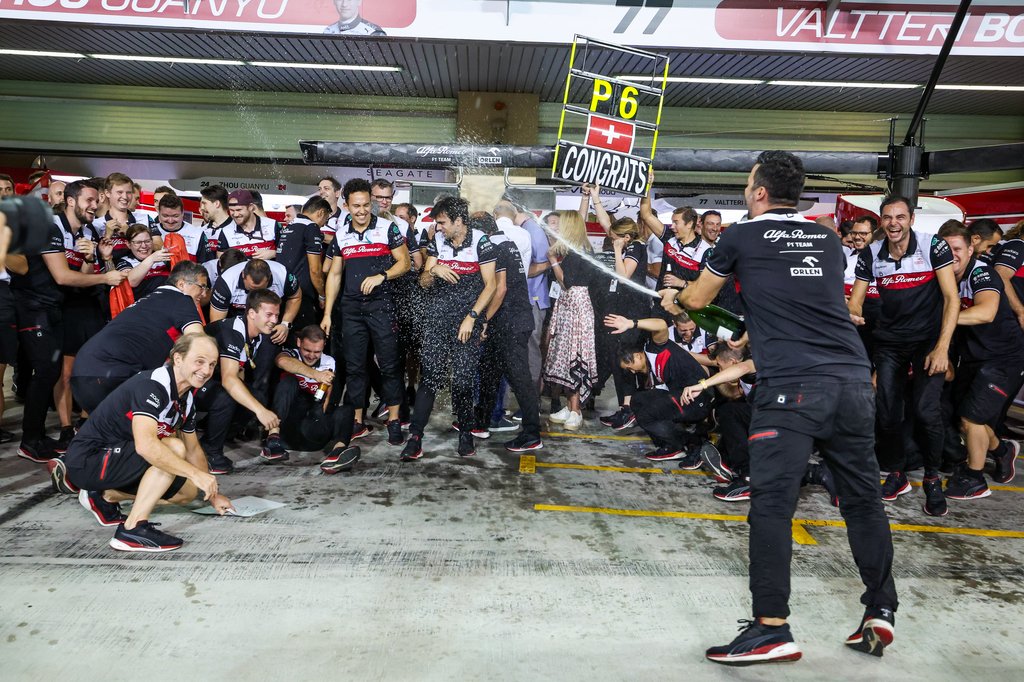 "I mean, the whole race was quite clear with the situation - if we can't beat them on track then we sacrifice the positions to let the McLarens and Alpines clear that window," Zhou divulged, when asked by Autosport about the team's strategy.

"So that was the case today. I stopped early, while the tyre was still fresh, but then we could be undercut by Sebastian and Lance, then we try to basically hold them up as much as possible to make a more clear window for others.

"I think it was very important that we were able to achieve that. We really gave everything out there today, and really happy for the team.

"Considering where we were in qualifying, Valtteri had to really try something extremely risky, a gambling strategy, while on my side I was trying to just stay up there and see if we can make a difference.

"After lap one, we always kept very similar position and that's the best we could do.

"So in the end, it was super close, equal on points but yeah, I knew that every small margin makes a difference. It's really important for the team for next year."