Renault boss Cyril Abiteboul says Formula 1 should create a thinktank of experts to devise the best plan for its 2026 engine formula, and even consider ideas like hydrogen power

Honda's decision to quit F1 at the end of 2021 has led to discussions over whether the organisation merely needs to tweak its current hybrid concept in the future or do something totally different.

F1's plan is currently to revamp its powertrain regulations for 2026, with the future hybrid plan most likely to revolve around a cheaper and less technically advanced solution in a bid to entice new engine suppliers.

Speaking at the Eifel GP, Abiteboul said that F1 teams should get together "sooner rather than later" and form a group tasked with studying what viable other options are available.

An all-electric solution is highly unlikely, but Abiteboul suggested that hydrogen should not be completely dismissed.

"I think that what matters most is that we define what is the right technology for the next generation," he said.

"There are many technologies that are emerging. We see that the automotive world is full of doubts.

"A few years ago we were never talking about hydrogen, it's a new thing up and coming.

"Will it be adequate or appropriate for Formula 1? Who knows? I don't know.

"I think it's important to pause a bit, wait to make the right decision. 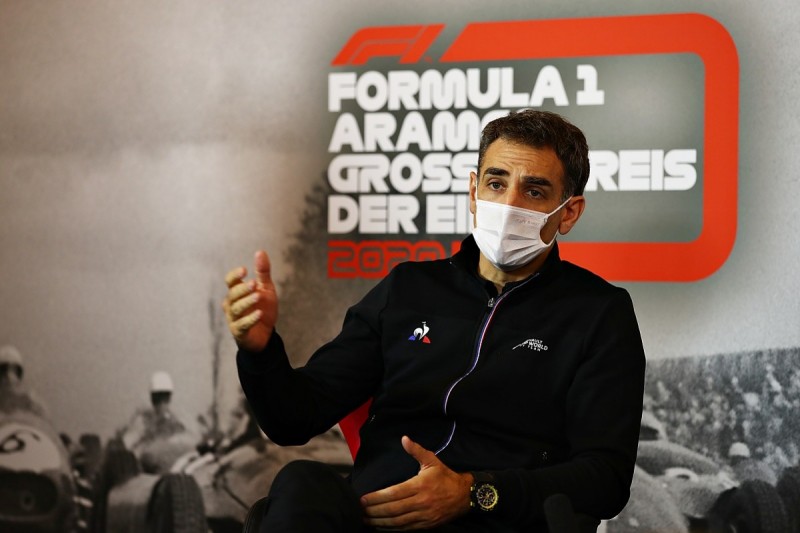 "But having said that, maybe one thing that we could do is do a group that could be a joint group of people, of experts, between all manufacturers, just like we worked on breathing systems for COVID.

"It was amazing to see actually this collaboration between teams.

"That's something we could do, to do some advanced research, advanced study for the next generation of power unit to make sure that it is right in terms of show, in terms of cost, in terms of competitiveness and in terms or marketing platform.

"We should do that sooner rather than later."

Mercedes boss Toto Wolff thinks that F1 has done the right thing in waiting until 2026 to introduce new rules, but he is eager for cost cuts to come into force sooner.

"Certainly, a cost cap and some kind of freeze needs to be introduced earlier - bearing in mind that we need the status where all engines are about equal," he said.

"We don't want to have a situation where we're freezing power units and there's big discrepancies in performance.

"But going forward, we need to all sit on a table, discuss what is the right technology for the real world; how can we simplify technology in order to spend less and then have a new format that everybody buys into from 2026 onwards."