Russell enjoyed a scrap with Max Verstappen over the bragging rights in the morning session, but the Mercedes driver won out with his 1m19.233s on a set of C5 tyres - the fastest time of the Barcelona test so far.

Encouragingly for Russell, he chalked up the most laps in the morning session, touring the Circuit de Barcelona-Catalunya 66 times.

But in a stop-start final hour of the session, the running was truncated by a late red flag for the stopped Sebastian Vettel, whose Aston Martin appeared to suffer a power unit-related failure which brought affairs to an early close.

Fernando Alonso had set the early pace but, as early as the first hour of running, his Alpine began to produce a copious amount of fumes - and the Spanish driver came to a stop on the outer track after Turn 13 to produce the first red flag period.

Alpine confirmed during the morning session that Alonso's problem was hydraulic related, and thus the team would bring a close to all further running for the day. 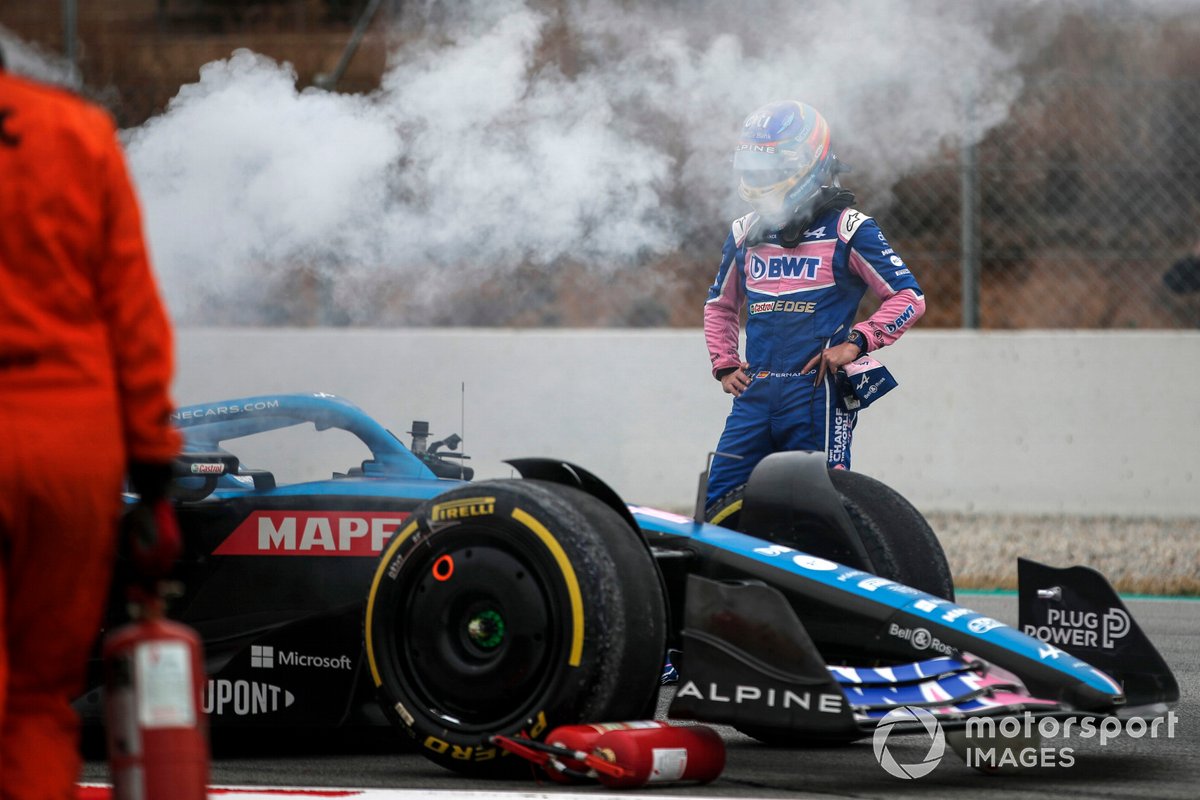 Fernando Alonso, Alpine A522, stops with technical issues as smoke rises from the car

As running had resumed, Max Verstappen eclipsed Alonso's time to sit atop the timing boards, and continued to raise the bar on his set of C3 tyres.

Russell then began to approach Verstappen's time, getting within a tenth of the Red Bull driver, who responded by punching in a 1m19.765s.

But Russell hit back, posting a 1m19.608s to go fastest on the C4 tyres, which withstood a further response from Verstappen - wielding the C3 rubber.

Pierre Gasly then brought out the second red flag of the day, suffering a crash at Turn 5 and requiring the recovery team to pull his AlphaTauri out of the gravel.

The session resumed with an hour to go, but three minutes later Guanyu Zhou spun off into the gravel at Turn 10 and introduced another stoppage to clear his beached Alfa Romeo.

The rookie driver produced another red flag half an hour later, crawling to a stop on the start-finish straight. Russell fired in his best lap in between the two Zhou-related stoppages, handing the ex-Williams driver control of the session.

Verstappen was half a second off Russell's best in second overall, sitting ahead of Vettel - who had leapfrogged Charles Leclerc for third in the session before Zhou's second stoppage.

Leclerc brought his best time to within 0.007s of Vettel but was unable to reclaim third place from the four-time world champion.

Nicholas Latifi was fifth fastest despite only logging five laps; Williams split its running in the morning, handing the first two hours to Alex Albon and the second two to Latifi, giving them equal dry running ahead of the afternoon's planned wet running to test Pirelli's wet and intermediate tyres.

Lando Norris was sixth fastest, ahead of the early-stopping Alonso, while the beleaguered Zhou still claimed 41 laps and sat eighth in the overall times.

Gasly was ninth fastest having been unable to mount a recovery after his crash, while Albon was 10th fastest from Nikita Mazepin - who turned only nine laps.