Lando Norris put McLaren on top at Barcelona with a pair of fastest times in the final hour of running on day one at Formula 1’s first 2022 pre-season test.

The Briton’s late improvements on the C4 soft tyre meant he jumped ahead of Wednesday morning pacesetter Charles Leclerc, to lead the day with a best time of 1m19.568s, which was 0.597 seconds faster than Leclerc managed during the opening four hours of running.

Norris's afternoon did feature one notable negative moment, where he stopped at the pitlane exit, which was briefly closed, just before the end of the second hour and had to be pushed back to the McLaren garage by his mechanics.

As was the case during the morning, the session ran uninterrupted throughout – a continued surprise for anyone expecting the wholesale rule changes to mean the teams would struggle to quickly rack up significant milage.

But there was again a milage discrepancy across the grid, as Haas and Alfa Romeo – both of which switched drivers for the second session – ended the day on much lower totals than the leading squads in the milage stakes, which were headed by Ferrari’s 153.

In total, eight teams completed over 100 laps, with Red Bull second best on 147 in Max Verstappen’s hands all day.

For most of the afternoon there was little change in the timesheets before Norris’s late improvements, save for the drivers that had jumped aboard for the second session working their way up the leaderboard.

This included Carlos Sainz Jr, who took over from Leclerc at the wheel of the F1-75 and finished the day with the third fastest time – 0.251s slower than his team-mate’s best, also using the C3 rubber.

Lewis Hamilton was another driver getting their first taste of official pre-season action in the afternoon, with the seven-time world champion working his way up to a best of 1m20.929s – set on the C3 rubber – to end the day with fifth fastest time, one spot behind new team-mate George Russell.

Hamilton a chunk of the afternoon in the Mercedes garage as the team worked on his front suspension, with the Briton’s ride observed as bouncing significantly as he ran down the main straight during the final hour.

Sebastian Vettel’s 1m21.276s from the morning session remained as the sixth best time, while Yuki Tsunoda’s 1m21.638s put him seventh for the day.

Fernando Alonso was shuffled down to eighth for Alpine, although he did improve his best time compared to the morning by nearly two seconds to a 1m21.746s – set on the C2 tyres. 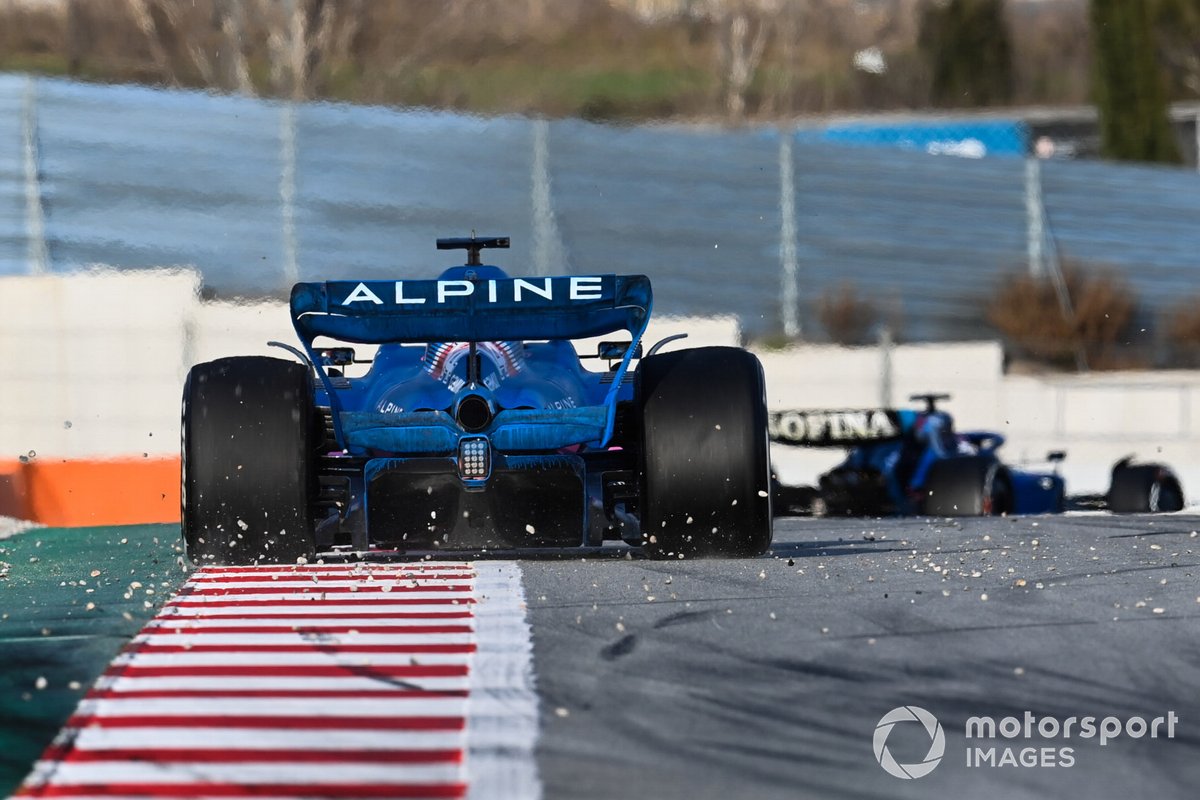 Verstappen spent all of the afternoon session completing long-run efforts, which meant his time from the morning session stood as his best to the end, where he finished ninth in the day’s combined standings.

Valtteri Bottas took over from Robert Kubica at Alfa Romeo and set the 10th fastest time overall with a set of C3 tyres, but he barely doubled his team-mate’s lap total.

In the morning Alfa Romeo revealed it was forced to work on a series of minor glitches.

Alex Albon’s first testing time with Williams yielded the 11th fastest time, just ahead of Mick Schumacher – in for Haas in place of Nikita Mazepin for the afternoon.

But Schumacher was another to register few laps as his running was heavily disrupted by his floor becoming damaged.

Lance Stroll was the lowest ranked afternoon-only runner with a 1m23.327s on the C2s putting him 13th, ahead of the best efforts from the morning running from Nicholas Latifi, Mazepin and Kubica.

How the new F1 cars look from the Barcelona trackside