Lewis Hamilton produced a late timesheet-topping charge on the final day of Formula 1’s 2022 Barcelona pre-season test, while Haas and Alpine completed just a handful of laps due to mechanical issues.

Hamilton set a pair of fastest lap times, finishing with a 1m19.138s set in the final 10 minutes on the C5 tyres, to eclipse Russell’s 1m19.233s from the morning session and claim the fastest lap time of the Barcelona pre-season test.

Russell’s effort, also set on C5 tyres, came under threat from both his Mercedes team-mate and Red Bull’s Sergio Perez, with the pair putting in a late surge once the track dried out sufficiently from a Pirelli wet tyre test that started the afternoon running.

Despite water tankers saturating the Barcelona circuit during the lunch break, only three wet tyre laps were completed – all by McLaren’s Daniel Ricciardo – before he led the switch to intermediate tyres.

All drivers stuck to the green-walled compound for the opening 90 minutes of the afternoon session until the track improved sufficiently for a return to dry tyres.

That allowed Hamilton to set the fastest overall time for a Mercedes 1-2 ahead of Perez in third after he pushed Red Bull team-mate Max Verstappen back to fourth place.

Four teams failed to complete any laps in the afternoon, most notably Haas, running a revised livery after dropping title sponsor Uralkali branding after Russian forces invaded Ukraine, with Nikita Mazepin only managing nine laps in the morning before a suspected leak forced the team to end the test early.

Alpine fared little better, with Fernando Alonso clocking 12 laps before a hydraulics problem triggered a fire in the back of the A522 F1 car with the Spaniard causing the first of five red flags. 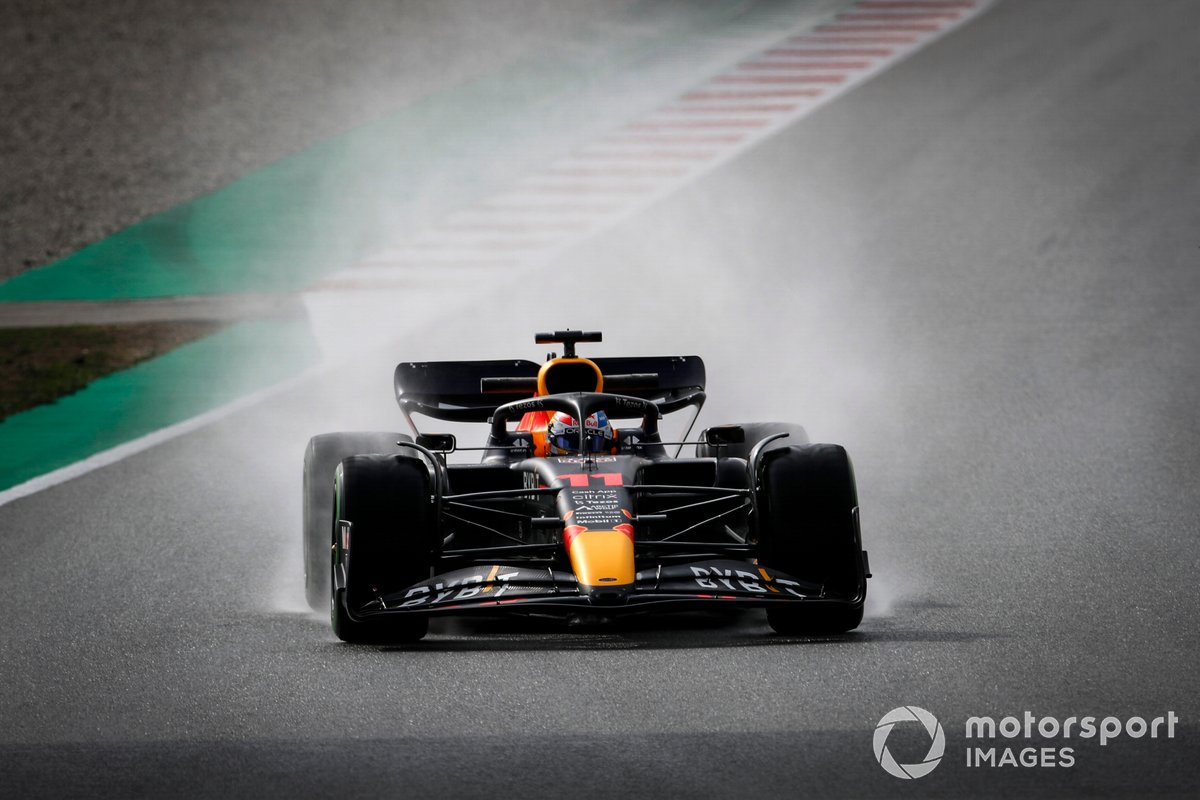 AlphaTauri also had its programme curtailed prematurely after 40 laps when Pierre Gasly went off-track at Turn 5 and damaged the AT03, which caused the second red flag of a stop-start morning.

Sebastian Vettel was forced to stop his Aston Martin on-track after 48 laps due to an oil leak, which caused an engine fire in another red flag shortly before the lunch break, with the team unable to repair the car in time to run later in the day.

Two other red flags were caused by separate incidents for Guanyu Zhou, but Alfa Romeo was able to notch up a combined total of 51 laps with Valtteri Bottas.

Despite the truncated morning running and wet tyre test in the afternoon, Mercedes, Ferrari, Red Bull, McLaren and Williams each banked over 100 laps.

Behind the leading Mercedes and Red Bull drivers, Vettel was still able to take fifth place on the combined times for Aston Martin ahead of Ferrari pair Charles Leclerc and Carlos Sainz Jr.

Williams duo Alexander Albon and Nicholas Latifi claimed eighth and ninth respectively in a solid showing by Williams as McLaren’s Ricciardo completed the top 10 ahead of his team-mate Lando Norris.

Despite his limited running, Alonso still claimed 12th for Alpine in front of Zhou, Gasly, Mazepin and Bottas, with Lance Stroll, Yuki Tsunoda, Esteban Ocon and Mick Schumacher all unable to take part in the final day due to earlier mechanical trouble for their respective teams.

Mercedes had to overcome "obstacles" in F1 test - Hamilton