Charles Leclerc headed the second day of Formula 1 testing at Barcelona, deposing Daniel Ricciardo's fastest time from the morning and setting a headline lap of 1m19.689s.

Ricciardo's morning session-topping time, which was posted in the final 15 minutes of the session after a Sergio Perez-instigated red flag - the first stoppage of the test - was cleared, posting a 1m20.355s to deny Leclerc's Ferrari team-mate Carlos Sainz Jr bragging rights.

The Australian's time stood strong through the first half of the afternoon's running, remaining on top during the day's second stoppage as Nikita Mazepin stopped at Turn 9.

The Haas driver had suffered from a fuel pump issue just before the half-way point of the afternoon's running, bringing out the red flag as he was left stranded at Campsa.

But with an hour and 15 minutes to go, Leclerc then mounted the first real assault on Ricciardo's time, punching in a 1m19.804s on the C3 tyre before retreating to the pits.

With half an hour left in the session, he almost faced a response from the C4-shod Pierre Gasly, but the AlphaTauri driver lost time in the final sector following Sergio Perez's Red Bull and was just under a tenth away from Leclerc's time.

Leclerc then improved even further, taking over a tenth out of his best time to cement top spot, logging 79 laps in the afternoon session after taking over from Sainz.

Gasly finished second on the timing boards with his 1m19.918s lap, with the Frenchman turning the most laps in the day with 147 tours of the Circuit de Barcelona-Catalunya.

Daniel Ricciardo was third after improving on his morning time by just under a tenth, making use of the C4 tyres in the process and logging 126 laps throughout the whole day. 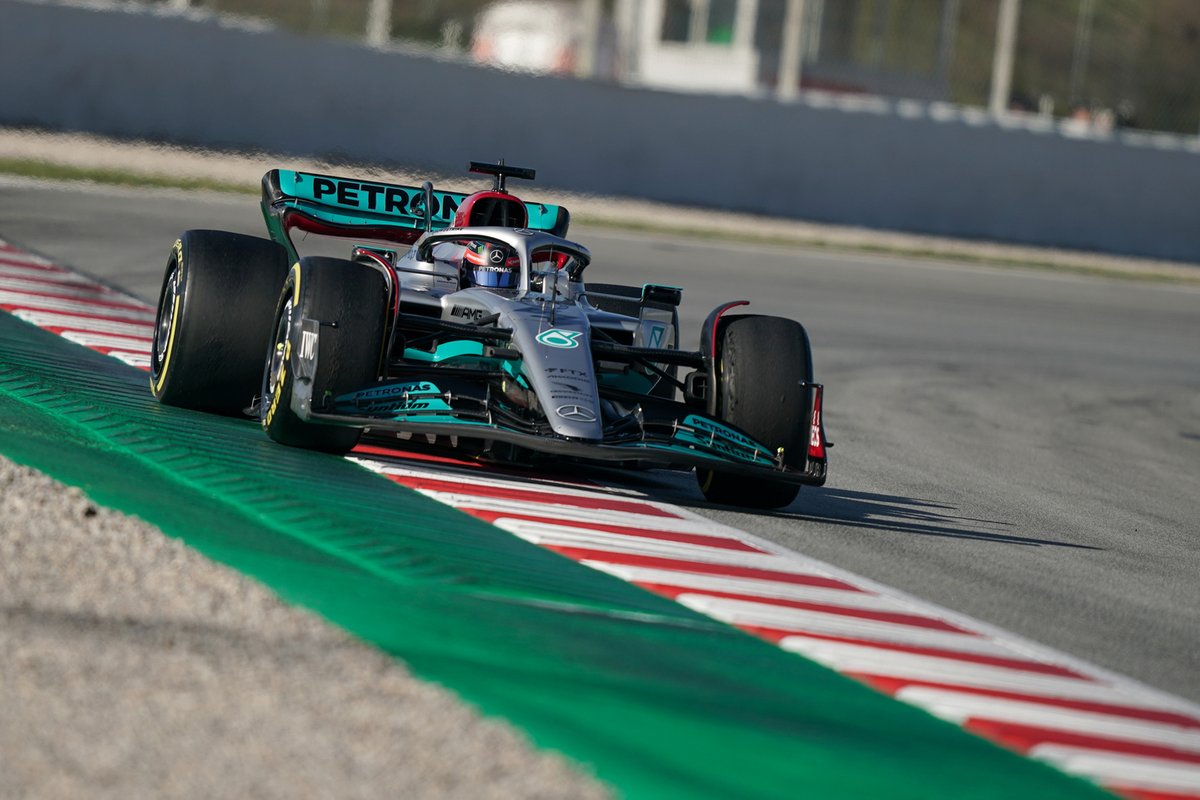 George Russell took over from Lewis Hamilton in the afternoon at Mercedes, and finished fourth fastest, just 0.01s quicker than Sainz's best lap from the morning session.

Sebastian Vettel undertook Aston Martin duties in the afternoon, beating Perez who was tasked with recovering mileage after his morning stoppage forced Red Bull into making repairs on his RB18.

Mazepin was able to return to the circuit an hour after his own fuel pump issue to continue his running, winding his time down to a
1m21.512s late on in the session to pip Alex Albon to eighth overall.

Rookie Guanyu Zhou made his first Alfa Romeo appearance, setting a 1m21.885s on the C3 tyres to complete the top 10. The Chinese driver completed 71 laps for the Swiss team, making up for a troubled morning after Valtteri Bottas only managed 21.

Former Mercedes team-mates Bottas and Hamilton completed the order, Hamilton with the slowest time after putting together only 40 laps.