As part of his 2019 Aston Martin Autosport BRDC Young Driver of the Year Award prize, Johnathan Hoggard got the chance to test a Red Bull Formula 1 car at Silverstone. As he told KEVIN TURNER, he was out to make the most of the opportunity

Patience is not normally high on the list of attributes people think racing drivers need. But there are times when it's important, such as when they're looking to time an overtaking move. Or when they are preparing for their first outing in a Formula 1 car.

Thanks to the coronavirus pandemic, it's hard to be certain of the timing of anything in the first half of 2020. And that means 2019 Aston Martin Autosport BRDC Young Driver of the Year Award winner Johnathan Hoggard doesn't know exactly when he'll get the chance to sample F1 machinery, to go with the £200,000 he's won. Or fit in much racing after the Daytona 24 Hours run he's had courtesy of winning the Sunoco Whelen Challenge.

Fortunately, Aston Martin Red Bull Racing finds a suitable gap between the UK's two national lockdowns to get Hoggard his chance to drive a 2012 Adrian Newey-designed RB8 around the Silverstone Grand Prix Circuit.

Hoggard arrives off the back of a successful FIA F3 test with Jenzer Motorsport at Barcelona as he considers his 2021 campaign, but he soon needs to call on that patience again as the track is damp and there is the odd sprinkling of rain. He completes an installation lap, in wet-tyres-shod RB8 chassis #2, but then stays in the garage.

Happily, the Red Bull team has put the whole day aside for Hoggard's test, so everyone is prepared to wait that little bit longer. And what's an hour or two after months - or perhaps more accurately years - of waiting to follow in the footsteps of former Award winners such as David Coulthard, Jenson Button, Paul di Resta, George Russell and Lando Norris? 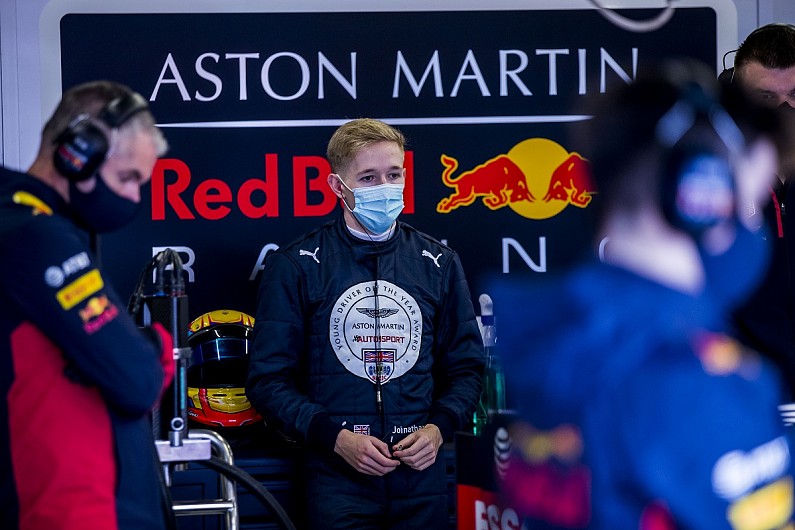 Understandably, Hoggard hasn't learned too much from his single tour.

"It's really fast!" he says. "It's really [about] making sure the seat is OK, the radio works, the normal sort of stuff. There's still a bit of standing water so we'll wait for it to dry."

"That first lap - and the day - will stay with you forever," enthuses judge and Aston Martin driver Darren Turner, who won the Award in 1996 and had his F1 test just a few months later.

"I remember seeing Dean Smith [the 2009 Award winner] do his F1 test the day before me, in the wet," adds 2008 winner, current judge and Formula E racer Alexander Sims. "The next day was dry and I thought, 'Thank God for that!' But the demo tyres were rooted after three laps..."

"It's a dream come true to drive an F1 car, especially around Silverstone GP. It was amazing feeling the power and the downforce. I was learning as much as I could" Johnathan Hoggard

Aside from the judges and Red Bull team, there are some key figures around to support Hoggard, including his mother and father, and Richard Dutton, boss of the Fortec team that ran him to the runner-up spot in the 2019 BRDC F3 Championship last year. Every now and again the 2.4-litre engine is fired up and Hoggard ventures out for a look at the circuit in his road car but, with conditions continuing to improve, the wait continues.

"It's nice having the whole day - there's no rush or pressure," reckons Hoggard. He seems utterly unperturbed by the prospect of handling an unfamiliar machine with 750-800bhp, though he does concede that the V8's power is "more than enough for today!"

Just after three o'clock, fresh slick Pirellis finally go on and Hoggard prepares to go out. It's windy and there are still a couple of damp patches at Club. Hoggard plays himself in gradually, with a 1m50s first flyer. He completes two more laps, each faster than the one before, then comes in.

Hoggard stays aboard and, after a few car checks, soon goes out for a longer run. He immediately looks more comfortable and betters his previous best on the first flying lap. He unofficially gets down to within three seconds of Kimi Raikkonen's fastest lap from the 2012 British Grand Prix. Comparison is always tricky, thanks to different rubber, a new surface and different conditions, but Hoggard is running without the RB8's KERS.

The soon-to-be 20-year-old gets out after this run and looks at the data. Some spots of rain have people glancing at the sky, trying to second-guess the weather, but Hoggard goes out for his final run just before five o'clock. Now his patience is rewarded.

There's another step up in performance - Hoggard even bounces off the rev limiter exiting Club on one lap as he comes onto the straight that bit faster - and finally records an unofficial best of 1m36s flat. That's 1.4s away from Raikkonen's 2012 mark, still without KERS and on Pirelli's demo tyres. It's clear he's getting into the zone.

Hoggard sits in the car for a moment before climbing out and allowing himself a brief smile. Then he has a quick debrief.

"Really good day," is his initial summary. "I got a bit nervous with the shower just before the final run, but it cleared up OK. It's a dream come true to drive an F1 car, especially around Silverstone GP. It was amazing feeling the power and the downforce. I was learning as much as I could."

An extra factor he has to consider, which even current F1 drivers don't have to grapple with, is that the RB8 is from the era of the powerful blown diffuser, which helps pin the rear - if you have the confidence to apply the power. It requires a technique that Sebastian Vettel mastered, giving him an edge over Mark Webber on the way to the German's third world crown in 2012. 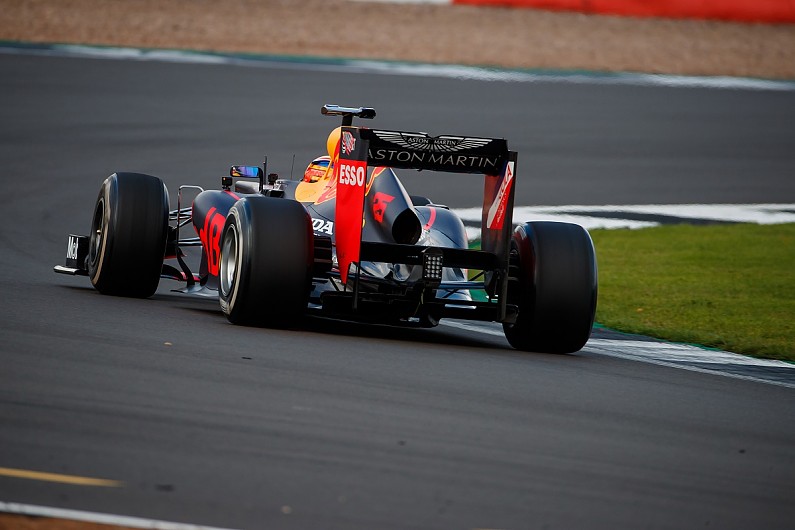 "The main thing was how much power it has, especially on full throttle, and the downforce with the blown diffuser," explains Hoggard. "You get on the power and it really does stick."

"With this car it's got the blown diffuser so there was a little bit of advice on how to get the best out of it," says Red Bull's Simon Rennie, who is running the test. "It's a bit of a foreign thing for drivers - to believe that more throttle will make the car more stable - but any advice we gave he was acting on in the next run."

"From seeing how he performed at the Award tests and how well he adapted to the three cars, I expected him to do a good job. He got straight on with it, there were no scary moments and he progressed with each run" Simon Rennie

Getting a feel for the tyres, another key modern motorsport requirement and one that is part of seven-time world champion Lewis Hamilton's armoury, is another consideration.

"The front tyres were graining quite a lot," adds Hoggard. "As I was driving better the tyres were going."

Rennie agrees: "As he was improving, the tyres were dropping off, so he didn't get many opportunities with the peak of the tyres. You only really get that when you know the car."

Rennie is impressed with Hoggard, but isn't surprised, having been present for his Award tests in MotorSport Vision F2, Ligier LMP3 and Aston Martin Vantage GT3 machinery last year.

"He did a good job," he says. "From seeing how he performed at the Award tests and how well he adapted to the three cars, I expected him to do a good job. He got straight on with it, there were no scary moments and he progressed with each run." 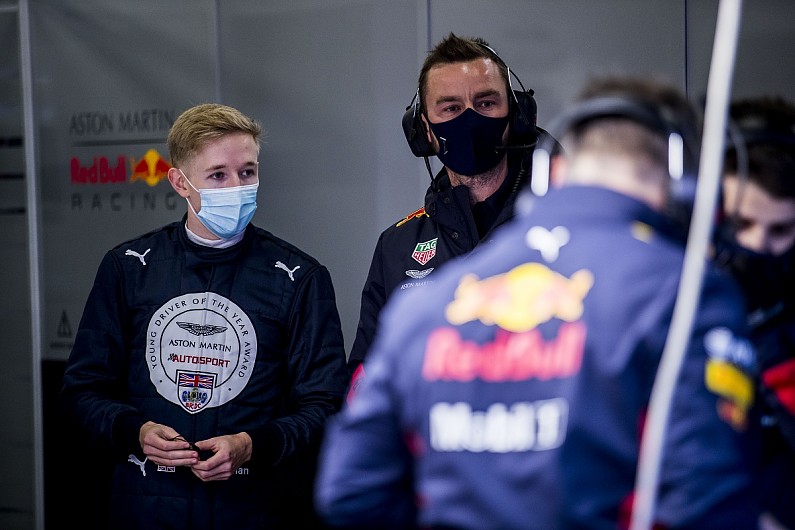 Knowing how hard to push in such a test is surely always tricky, but Hoggard was clear he wasn't just going to cruise around: "It was a case of be confident and sensible, building up nicely. I had a couple of oversteer moments on traction, but it's got so much grip.

There's no more time for that today, but the ultimate goal of a more permanent F1 berth remains. Back to the hard work of climbing the junior single-seater ladder - and more patience. 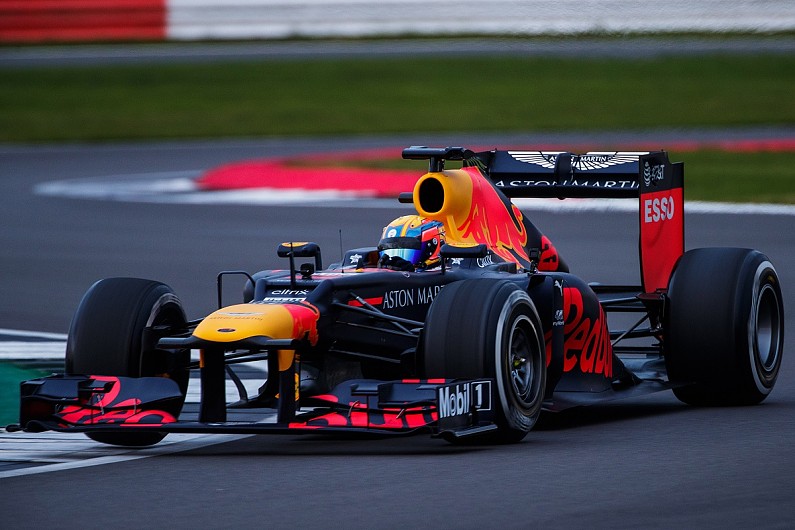