Twelve Formula 1 drivers have been warned for their role in the crash at the restart of the Tuscan Grand Prix that resulted in the race being red flagged.

The race at Mugello was suspended on lap seven after a multi-car incident on the pit straight as the field came around to restart the race following an early safety car period.

The incident led to Antonio Giovinazzi, Kevin Magnussen, Nicholas Latifi and Carlos Sainz Jr all retiring from the race due to crash damage, with debris being left strewn across the circuit.

As the field came to the control line where they are able to return to racing speed from, led by Valtteri Bottas, a number of drivers further back appeared to accelerate earlier and crash into cars ahead.

The stewards swiftly confirmed they would be investigating the incident after the race, summoning a number of drivers for their actions under the safety car.

After meeting with Magnussen, Latifi and Daniil Kvyat, and considering the onboard footage and telemetry available, the race stewards at Mugello decided to hand 12 drivers a warning. 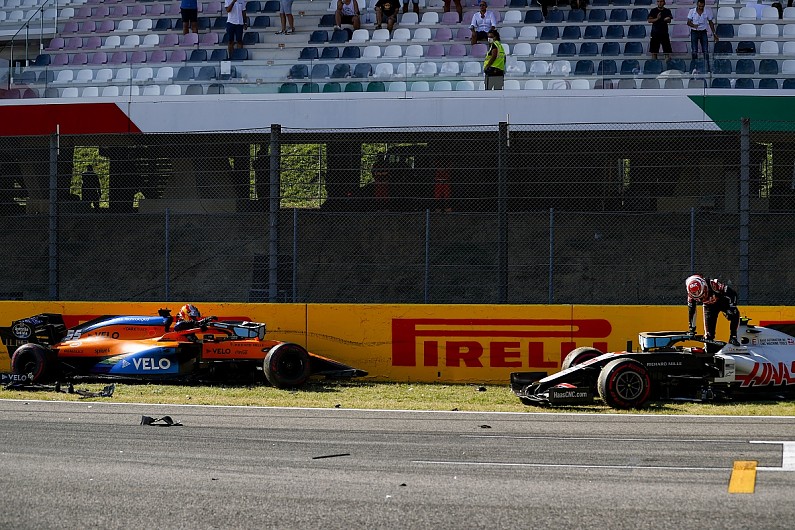 "The stewards conclude that the root cause of this incident was the inconsistent application of throttle and brake, from the final corner along the pit straight, by the above drivers," the bulletin reads.

"However this incident demonstrates the need for caution to be exercised in the restart situation and note that there was an extreme concertina effect which dramatically increased as it moved down the field.

"We also note that some drivers might have avoided being involved in the incident had they not followed directly behind the car in front.

"By doing so they effectively blocked off all visibility of what was happening immediately in front of the preceding car.

"A warning has been imposed as it is the view of the stewards that no one driver was wholly or predominantly to blame."

A warning is part of the FIA-appointed stewards' penalty system, but has no bearing on drivers' superlicences, unlike a reprimand.

Race leader Bottas came under fire from Haas' Romain Grosjean for slowing the field to the control line, with the Mercedes driver defending his actions after the race.