A first-corner collision in Senegal between the Extreme E teams of Lewis Hamilton and Nico Rosberg paved the way for Rosberg X Racing to score consecutive championship victories.

The reduced dust clouds compared to an inaugural event in Saudi Arabia in April enabled a four-car finale for the first time on the four-mile beach course close to Lac Rose.

But that showdown was soon cut to just two entries after early crashes for the X44 team owned by Hamilton and fellow Formula 1 world champion Jenson Button’s JBXE challenger.

With Sebastien Loeb having started the semi-final for X44, team-mate Cristina Gutierrez was in the hot seat for the finale but was eliminated at the exit of Turn 1.

Gutierrez and Rosberg X Racing driver Molly Taylor powered ahead in the shootout against Veloce Racing and JBXE to face off on the sprint along the shoreline.

X44 opted for the wide line with RXR on the inside and they ran side-by-side, but at the apex Taylor appeared to clip a wedge of sand that knocked her quickly off line.

That meant she and Gutierrez whacked noses, with the X44 car running wide before quickly stopping with a suspected steering failure. 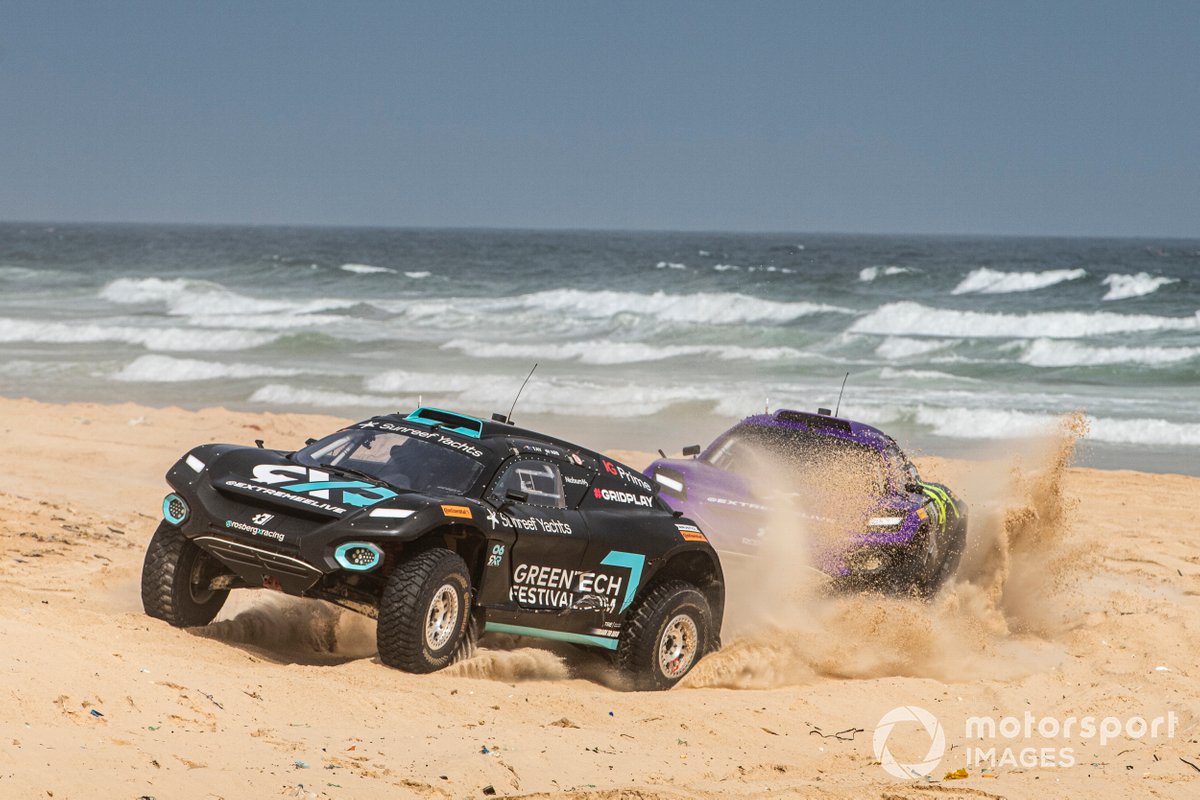 JBXE also came to a halt when starting driver Mikaela Ahlin-Kottulinsky swapped lanes on the beach and ripped the rear-right wheel off when she hit a sand bank.

That left Taylor in front to fend off from the chasing Stephane Sarrazin, in for Veloce Racing, as she stretched out a lead of 1.53s on the approach to the driver change over zone.

But as the 2016 Australian Rally champion entered the 30km/h limited area, race director Scot Elkins threw a red flag with vehicles still on circuit to recover the X44 and JBXE cars.

RXR still opted for a driver swap to hand over to triple World Rallycross champion Johan Kristofferson, while Sarrazin stayed put while the teams awaited instructions.

Elkins opted for Sarrazin to hand over to co-driver Jamie Chadwick and for the two remaining cars to line up on the original starting gate with Kristoffersson on the inside.

He soon thumbed the hyperdrive boost at the restart, with W Series champion Chadwick following suit shortly after, but the RXR held the advantage into the opening corner.

From there, Chadwick could not mount a response and gradually fell back to 14.676s at the flag as Kristoffersson upheld a 100% record for RXR in the short life of Extreme E. 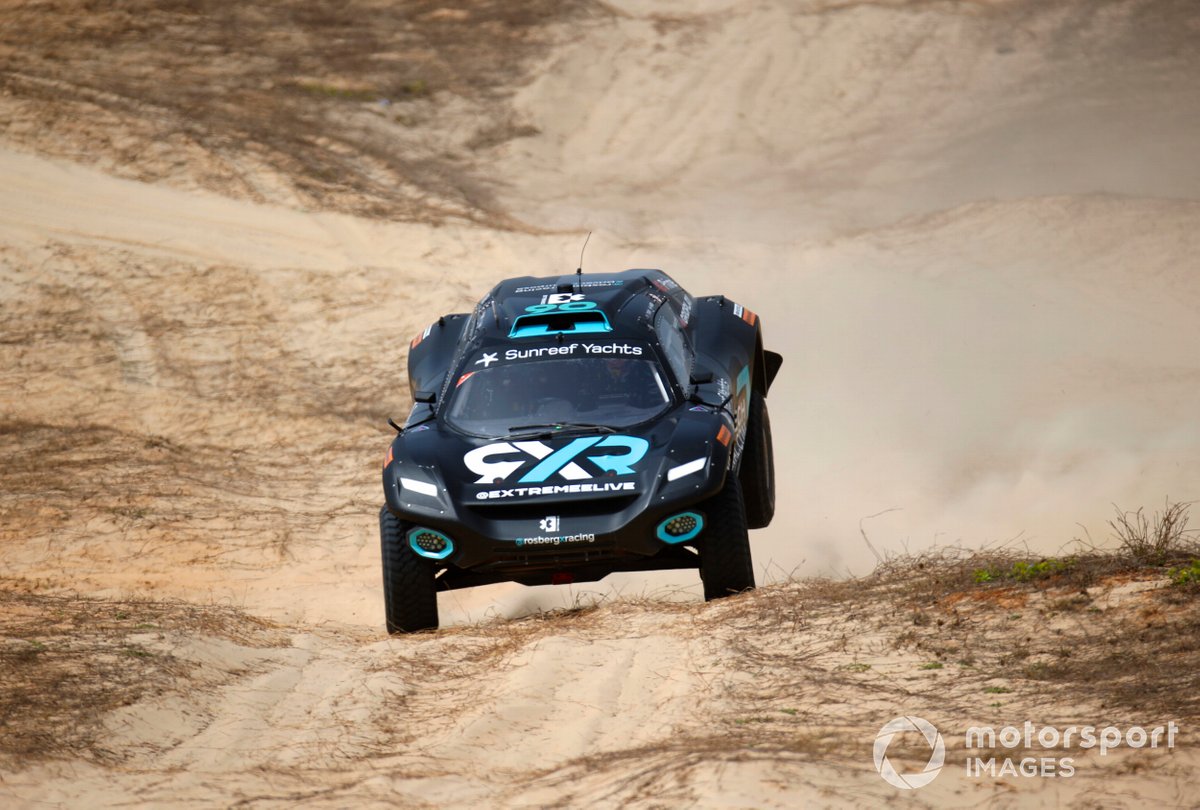 Meanwhile, Chip Ganassi Racing came up trumps in the last-chance Shootout race to decide positions six through to nine.

Carlos Sainz, hampered by a water leak in qualifying, stole an early march from the middle of the grid.

But the double World Rally champion lost momentum as he drifted across to the inside to shut the door on the Andretti United machine.

Its driver Timmy Hansen then sought a cutback for a wide line into Turn 1, giving Sainz the space he needed to the bully his Acciona Sainz car up the inside and streak into the lead.

The bumps through the middle sector really appeared to upset the Andretti United car, which brought the chasing Sara Price into the mix for Chip Ganassi Racing.

She attempted a pass up the inside through the supposedly one-line middle sector, but Hansen was able to fend off the advances on the run for the driver change over zone.

Sainz handed over to team-mate Laia Sanz, who did not connect her radio, with 8.87s in hand as Catie Munnings took over from Hansen.

Price handed over to Kyle LeDuc, supremely fast all weekend until a tree knocked his car into a reset mode and forced him out of the semi-finals, who hunted down his rivals. 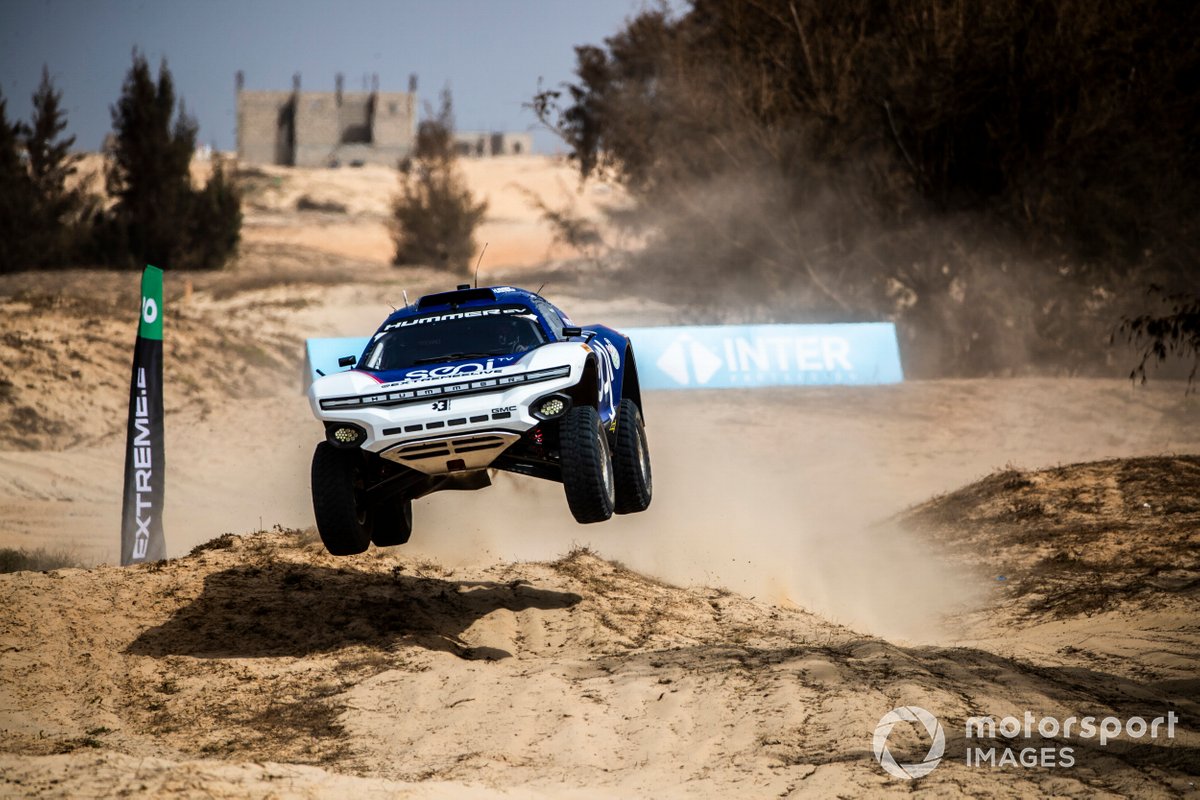 Munnings defended stoutly for the better part of half a lap before LeDuc threw his Odyssey 21 machine to the left over a series of crests and demoted Munnings in stunning fashion.

The pair had carved chunks out of the gap to Sanz, giving LeDuc a quick run for first place.

He pulled for the inside line and caught air to effectively jump into the lead and bring home the race victory by an eventual 7.74s ahead of Sanz and a rapidly closing Munnings.