Rene Rast took his seventh pole position of the 2019 DTM season at the Nurburgring, with BMW making a surprise improvement as Bruno Spengler sealed a front-row start

Rast's final-minute lap was enough to secure pole courtesy of a 1m19.642s lap, as BMW put up sterner opposition in a bid to secure its first pole since the Brands Hatch opener in August.

While Rast was placed under investigation for speeding in the pitlane, he was only hit with a fine for the transgression.

Muller managed to jump from the fringes of the top 10 to third in the last minute, allowing Rast to grow his title advantage by two points to a margin of 22 with four races remaining.

Mike Rockenfeller - who topped yesterday's second practice session - qualified in fourth ahead of WRT Audi's Jonathan Aberdein, with the pair both taking it in turns to lead the times during the session. 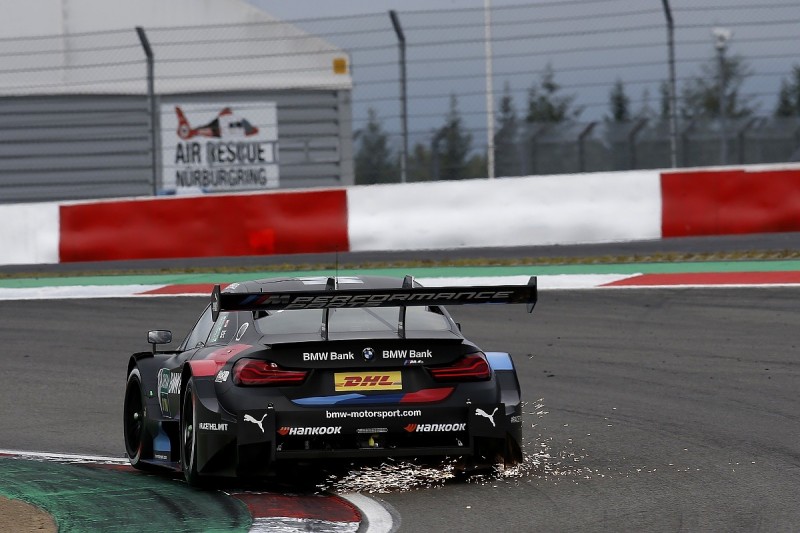 Sheldon van der Linde also briefly topped the times during a flurry of late fast laps at the Nurburgring but was shuffled down to sixth ahead of BMW stablemate Timo Glock.

Loic Duval, Jamie Green and Robin Frijns made it seven Audis in the top 10 by taking eighth, ninth and 10th respectively.

Marco Wittmann was a surprising 11th, having seen an initial bid at a fast lap hindered by coming across Green at the Coca-Cola Kurve right before beginning his effort.

Green was placed under investigation for blocking Wittmann, but cleared of any infringement.

WRT's Pietro Fittipaldi was 12th ahead of BMW's Philipp Eng, who caused a late yellow flag when he pulled off the track with a gearbox problem.

Di Resta's team-mates Jake Dennis and Daniel Juncadella followed in 15th and 16th, while the final Aston of Ferdinand Habsburg was 18th after retiring during the session.

Following qualifying, both Eng and Dennis were disqualified for "illegal work under parc ferme conditions" - according to a DMSB bulletin.

A clarification from the DMSB relating to the Lausitzring confirmed that Habsburg will take a five-place grid penalty for the opener.

This was due to the Aston driver picking up a thrid reprimand of the season at the Lausitzring.