Di Resta had given R-Motorsport its second-best qualifying result of its debut campaign by placing his Vantage in fourth after the team reacted well to the changeable conditions on Saturday morning.

When polesitter Marco Wittmann and fellow front-row starter Rene Rast bogged down at the beginning, Di Resta swept to the outside and passed the BMW driver into Paddock Hill Bend to lead the race.

Di Resta kept Wittmann behind him for 14 laps, but he was then required to serve a five-second time penalty at his mandatory pitstop that dropped him down the field before he eventually retired with an engine-related problem.

The ex-Formula 1 driver is adamant that did not constitute a jumped start.

"If that's a jump start, then every single start every single person has done for the last 15 years would be illegal," Di Resta told Autosport.

"They [the stewards] need to look at themselves and [decide] if that's the tolerance they want to work to. That's fine.

"But that was acceptable in the years before, so I don't see why it is unacceptable now, or the way it now works."

When Di Resta's comments were put to DTM boss Gerhard Berger by Autosport, the series chief admitted it was a tough call to make.

"You know, firstly I cannot tell you 100% it is right or wrong - it is a bit like in football, sometimes you discuss everything [that is an incident]," Berger said.

"It is measured by sensors. So, it's not really a problem from my eyes - I would say I've not seen it [an infringement] - but it was on the limit.

"That's what it should be. But the sensor does not lie. I have no arguments against it. But still, at the end of the day, it's happened. 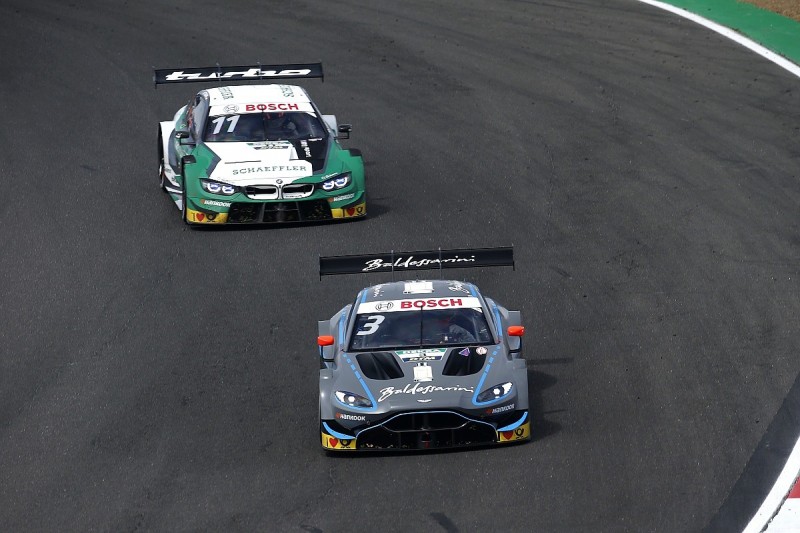 R-Motorsport team principal Florian Kamelger felt it was "pointless" to discuss the incident after the stewards had made the call.

But Kamelger added: "We accept stewards' decisions. I think it was a tight decision, a tough decision.

"There is a camera [angle] that doesn't show a jump start, there is something [another angle] where you could argue there was a rolling phase at the beginning.

"Difficult to say. At the end of the day, it's a pointless discussion because the decision has been taken."

Both Di Resta and Daniel Juncadella told Autosport that R-Motorsport had made a "step forward" with the underpowered HWA-built engine for Brands.

Di Resta revealed that a power-related problem had hindered his defence against Wittmann while leading.

He said: "There was no chance he was going by, we had another issue as well that was holding back some lap time.

"We weren't managing it in the background and didn't know about it until the end of the race."