With four rounds left before Mercedes exits the DTM, it is 273 points clear of nearest challenger BMW and its drivers occupy four of the top five positions in the standings.

DTM manufacturers traditionally favour their highest scoring drivers towards the final rounds of the season.

At Brands Hatch last weekend, Mercedes' points leader Gary Paffett trailed winner and team-mate Paul di Resta by less than a second for the duration of race two. Paffett did not attempt an overtake, despite Audi's defending champion Rene Rast catching the pair late on.

When asked by Autosport if he would allow his drivers to race as normal, rather than intervene to maximise the team's chances of winning the title, Mercedes DTM boss Ulrich Fritz said: "No, we have a few team rules and those are clear.

"We try to keep that under control but it is difficult. 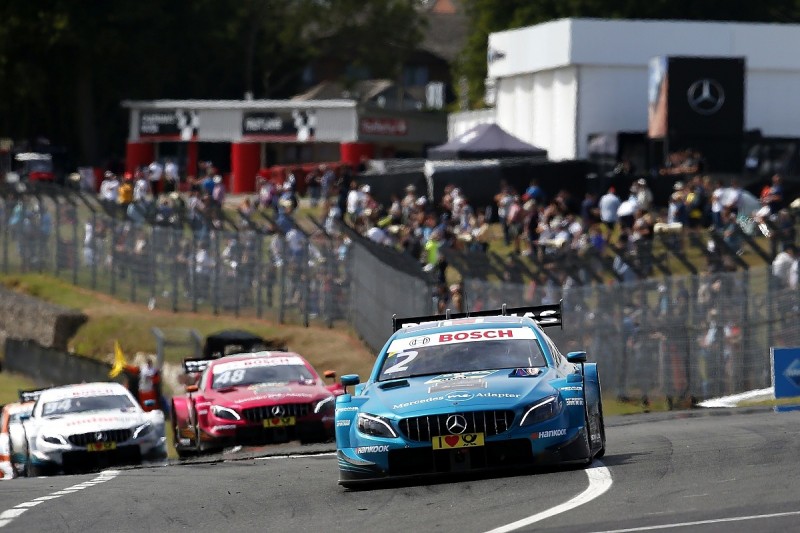 Fritz said he expected those orders to be obeyed, regardless of the incentive of becoming the final driver to win a DTM title for Mercedes - which has been a series stalwart since its relaunch in 2000.

"We want to keep those guys in the programme and we all know that they can perform and that they are great race drivers, otherwise we wouldn't have them in the team," said Fritz.

"But we also ask them for behaviour, we ask them for sportsmanship and doing silly things does not help leverage their career."

DTM boss Gerhard Berger insisted Mercedes' domination during its final season had not put the series in an awkward position.

"On one side, I'm happy because it shows there's nothing controlled," he told Autosport. "Everybody does a job as good as they can and that's what it is.

"We would have expected more to have an Audi and a BMW at the front but Mercedes just did a good job and got the right things together.

"If you have a system where six cars are controlled out of one hand like it is in Mercedes [by HWA] then it's normal that they're going to use their strategy.

"The field is so close together that you have to be very careful to do the rights things.

"So I hope in the future to spray out more different teams so this control of one hand is limited.

"That's a definite downside at the moment in our structure but we are working on it."