Rene Rast took a commanding first win of his DTM comeback at Imola over fellow Audi driver Nico Muller after a controlled drive in searing heat.

The three-time DTM champion was never threatened after the first corner when the Abt driver held off a spirited effort from Team Rosberg rival Muller around the outside, and went on to secure the 25th win of his career by 3.809s.

Behind the Audi drivers, a storming drive from Mirko Bortolotti helped the Grasser Lamborghini driver to secure third from 16th on the grid after passing Thomas Preining on the penultimate lap of the race.

The top four on the grid were unchanged at the start, as Rast led Muller, Preining's Team Bernhard Porsche and Clemens Schmid (Grasser Lamborghini).

Rast pulled out a gap of around a second before starting the pitstop sequence on lap six, where he was followed in by Preining.

When Muller came in one lap later, followed in by Schmid, he came under pressure from Preining that allowed Rast to stretch his advantage.

Kelvin van der Linde, who ran fifth in the opening laps, waited until lap 10 before making his pitstop from the lead and rejoined ahead of Schmid in fourth. He also briefly headed Preining, only for the Austrian to muscle back through on the approach to the Villeneuve chicane with two wheels on the grass.

The third Abt Audi of Ricardo Feller made up for a slow start by passing Marco Wittmann's Walkenhorst BMW into the first Rivazza on lap 19, then demoted Schmid to take fifth - but his day ended prematurely when he pulled into the pits on lap 26 with a right-rear puncture. 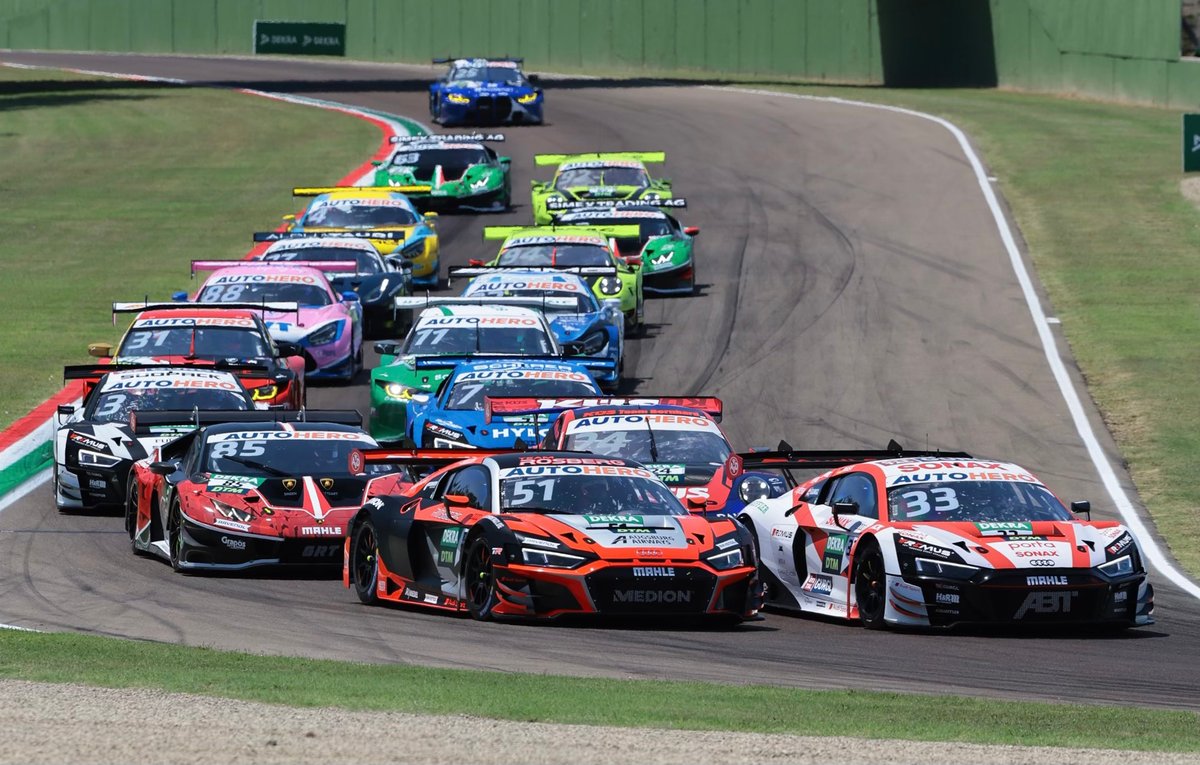 That meant there was one fewer car for Bortolotti to clear on his charge back through the field after a 10-place grid penalty for running incorrect tyres in practice had demoted him to 16th on the grid.

The Italian ran a lengthy first stint and waited until lap 22 before pitting and rejoining eighth. He then made use of his fresh tyres to get alongside Wittmann for seventh into the first Rivazza, before completing the move into the second part of the right-hander.

Bortolotti then quickly caught team-mate Schmid and passed him with an identical move, before clearing van der Linde and outdragging Preining to steal third on the climb to Piratella.

He also took fastest lap for good measure, putting him three points off the championship lead.

Preining held on to finish fourth ahead of van der Linde, with Schmid taking sixth and Wittmann seventh.