Rast engaged in a frantic fight for the lead with Gary Paffett, one of the two Mercedes drivers with whom he is scrapping for the crown, but Paffett's race was undone by a late safety car, and he dropped to fourth during the seven-lap sprint to the finish.

But with pre-race points leader Paul di Resta taking a lowly eighth, Paffett now moves back into the lead of the standings, six points ahead of di Resta and 15 clear of Rast, leaving the trio in title contention for Sunday's season finale.

Paffett took the lead on the opening lap when polesitting Mercedes team-mate Lucas Auer moved aside for him in the Mercedes Arena, while Rast dropped from third on the grid to fourth behind the BMW of Augusto Farfus.

Rast passed Farfus on the fourth lap, then cleared Auer a lap later, before Auer started to slow and eventually retired into the garage.

Rast had just started to trim Paffett's two-second lead when he made his mandatory pitstop, while Paffett was forced to cover that by stopping a lap later.

With his tyres up to temperature, Rast caught Paffett on the Mercedes driver's first lap out of the pits, then seemed to have made a clean pass on the back straight on the following tour, only to overshoot the Spitzkehre hairpin.

Rast tried again at Mercedes Arena and made it through into a net lead, but Paffett stayed close, and several laps later the duo began an intense scrap for the lead as they depleted their respective DRS. 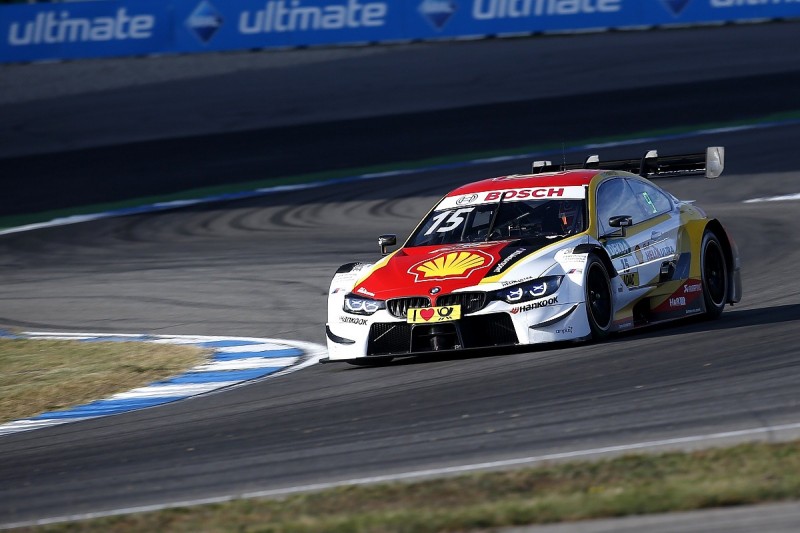 That ended when Farfus's left-side door fell off on the back straight, and the safety car emerged.

Rast scampered clear at the restart, while Paffett was drawn into a battle with Timo Glock's BMW.

Glock made it through, but the real danger man was Robin Frijns, who had been one of the last to pit in his Audi. Frijns was ninth at the restart, but charged up the order on his fresher tyres, passing Paffett for third and then, on the penultimate lap, taking Glock for second.

Frijns then finished right on the bootlid of Rast's Team Rosberg Audi, with Glock taking third from Paffett.

Loic Duval had a great race from near the back of the grid to take fifth from Audi stablemates Mike Rockenfeller (a late stopper) and Nico Muller, while di Resta was eighth.

Di Resta ran fifth early on but was one of the victims, along with Farfus, of an optimistic move in the early stages by Frijns, who was instructed to give the places back as a result.

Di Resta had used more than half of his DRS in the first seven laps, and was almost out of it by the time of the restart, meaning he did a good job to lose only two places from sixth to eighth.

The final points places were claimed by Bruno Spengler (BMW) and Edoardo Mortara (Mercedes), both recovering from trips into the gravel at the Sachskurve.