The 37-year-old German, who claimed the 2008 and '09 titles (pictured below) with Audi, revealed his decision to quit the series on the eve of what will be his final race on Sunday.

It brings to an end a DTM career that began when he joined the reborn series in 2000 with Opel as a graduate of the German Formula 3 Championship.

He drove for Opel for five seasons, before switching to GT racing with Maserati in 2005.

After a stint in A1GP, Scheider was signed up by Audi for 2006 and has been ever-present with the Ingolstadt marque for 11 seasons.

His Audi legacy includes seven race wins and 11 pole positions in the DTM, as well as Spa 24 Hours victory in 2011.

"I got a phone call two days ago telling me that my contract was not to be extended with Audi," said Scheider.

"I am retiring, and this is for sure one of the most emotional moments of my life.

"After so many positives and so many negatives, this has made me into the person I am now. 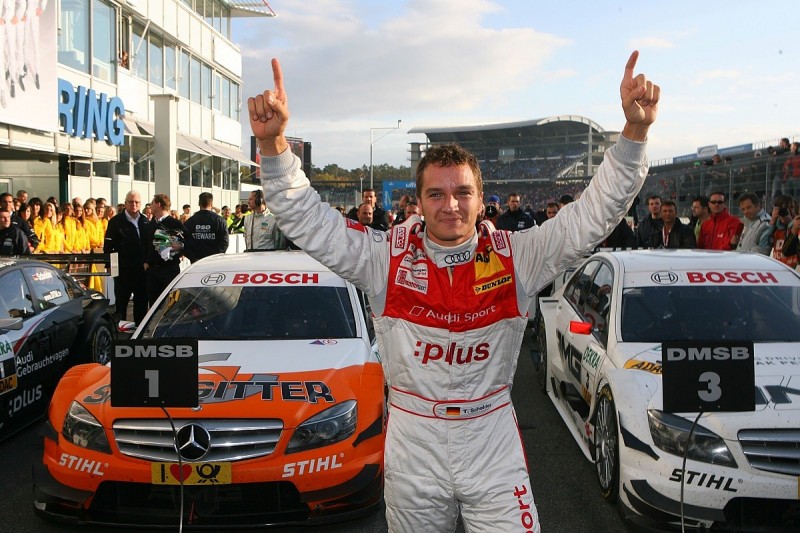 "I would like to say thankyou to everyone involved in my DTM career, including Audi where I spent 11 seasons.

"I announce this with pleasure in one way and sadness in another that I will attend my last DTM race tomorrow."

After his initial announcement in German, Scheider turned away from the audience in tears until he was approached and hugged by his Audi team-mates.

His last six seasons did not match his earlier heights, Scheider switching from the top-line Abt squad to Phoenix in 2014, although he did take victory at the 2015 Hockenheim finale.

"I'm pretty sure the DTM will be in my heart for the rest of my life," he said.

Scheider has left the door open for other motorsport activities, and expressed a wish to contest the World Rallycross Championship finale next month in Argentina.