Wittmann had taken pole for the race in the morning but came under immediate pressure from Rast in the race when the safety car-led first three laps ended.

The BMW driver held off Rast through the slow first sector, taking in the Haarbocht right-hander through to the De Strubben hairpin exit, before the battle came to a close when R-Motorsport driver Daniel Juncadella stopped his Aston Martin Vantage at the side of the track.

Following the safety car called to retrieve the Aston, Wittmann made a superb restart to pull a gap of over a second to Rast's Audi, and his victory hopes were given a boost when Rast ran slightly wide over the exit of the Geert Timmer Bocht chicane.

Wittmann would again come under threat, but not until the pitstop window, and it was Muller who would prove to be a thorn in the side of the BMW driver.

Muller, second in the standings behind fellow Audi driver Rast, could only qualify sixth but climbed the order in the opening stint after overcoming Timo Glock in a tight battle that led to the BMW driver skating over the gravel at the De Strubben Hairpin. 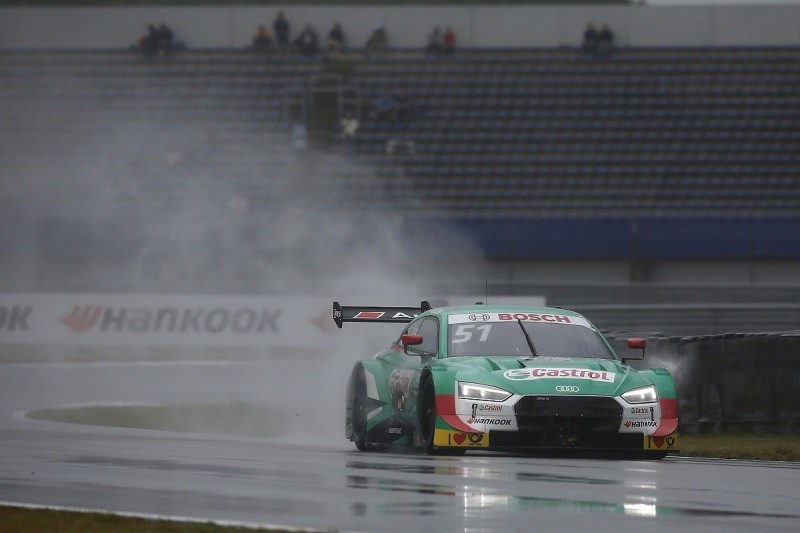 Running third, Muller extended his first stint right up until the 26th lap of 31, and pitted to emerge ahead of Wittmann and Rast, boosted by the pair reigniting their scrap after both drivers made their mandatory stop.

But in the torrential conditions, the outlap was made all the more challenging, and now second-placed Wittmann was able to make up a deficit of several seconds to get by before the run to the Meeuwenmeer kink and return to the lead.

VICTORY FOR WITTMANN! This was the pass on Nico Mueller that secured his third victory of 2019. ??#DTMAssen pic.twitter.com/jrr6BpYjpw

Muller was able to get his tyres up to temperature before Rast could pass him and held onto second at the flag, making it two Audis on the podium.

BMW's Philipp Eng was fourth after defeating Glock late on, with the ex-Formula 1 driver battling his way back through the field after his early mistake and pulled off a stunning move around the outside of Eng earlier in the race.

WRT Audi's Jonathan Aberdein was compromised by the red flag caused by Jake Dennis in qualifying, but climbed from 10th on the grid to take sixth in the race as team-mate Fittipaldi struggled in the conditions and slipped from fourth to 11th.

Jamie Green was another to rise through the field and took seventh ahead of Duval who had impressed by qualifying third.

Mike Rockenfeller was ninth for Audi, while Sheldon van der Linde recovered to 10th after being punted into a spin at the De Strubben hairpin by BMW stablemate Bruno Spengler.

Spengler served a drivethrough penalty that meant he could only finish 15th.

Local driver Robin Frijns endured a nightmare race that began with starting at the back of the field due to an oil pressure issue in qualifying.

He climbed into the top 10 but spun off into the barriers backwards after running over a kerb, damaging the rear of the car and forcing him into retirement.

Dennis was the leading R-Motorsport Aston Martin driver and finished 12th ahead of team-mates Ferdinand Habsburg and Paul di Resta, who narrowly missed colliding with a hare during the race.