Spengler claimed the lead with a clean run through the first sequence of corners on the opening lap and, despite a brief challenge from Jamie Green in the second half of the race, always appeared in control of the race.

Polesitter Rene Rast made a better getaway than he had by stalling a day earlier but was still outflanked by fellow Audi drivers Nico Muller and Loic Duval on the run to the first corner.

All three Audis went deeper than necessary at the hairpin, however, allowing Spengler - who had lined up fifth - through into the lead ahead of Muller.

Rast then attempted to go around the outside of Muller at the chicane and appeared to have the position sewn up, only to receive a hit from the race-one polesitter in the second part of the corner that left the championship leader facing the wrong direction.

Muller was able to continue unhindered and attempted to get back ahead of Spengler - running deep into Turn 1 on lap five - in the following laps before he was forced to the pitlane for a drivethrough penalty.

Free from the attention of Muller, Spengler settled into a comfortable lead before serving his pitstop at the end of lap 32 of 70.

Green had pitted from fourth 16 laps prior to that, but cleared Phillip Eng and Robin Frijns during the pitstop phase and spent a handful of laps within a second of Spengler. 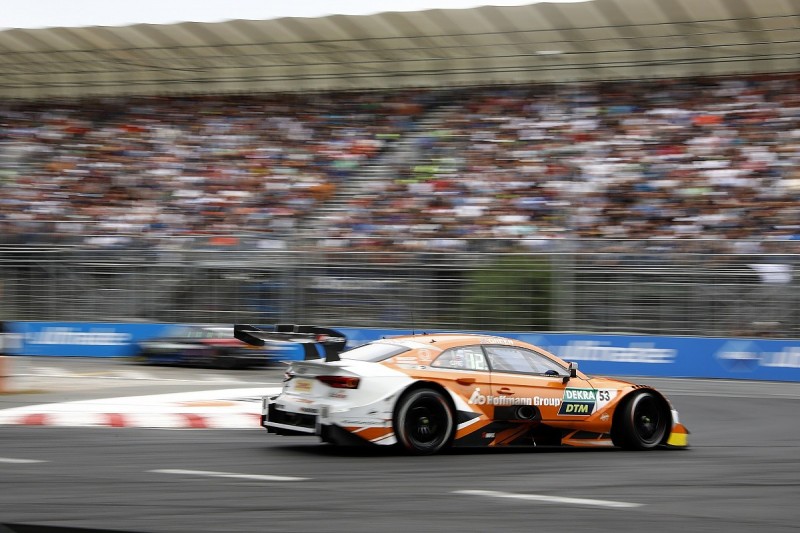 But 2012 champion Spengler broke clear of the Audi shortly afterwards and spent the final stages of the race with a five-second buffer back to Green, ultimately clinching his first victory since the series' visit to the Nuremberg street circuit in 2017 by 5.765s.

As the top two positions remained stable, the battle for the final podium position was of most interest in the closing laps.

Frijns had held the position courtesy of overtakes on Duval and Eng's BMW M4 but was caught by Audi stablemate Mike Rockenfeller with around 15 minutes of the race left to run.

The pair spent three laps separated by four tenths, but Rockenfeller got a superior run off the chicane 10 laps before the finish and placed his RS5 on the inside line at the second hairpin to secure the final podium position.

Rockenfeller did spend the final laps attempting to chase down Green but ended up just over a second behind the second-place finisher.

Frijns came home a comfortable fourth ahead of Eng, who had been on course to finish sixth until Marco Wittmann slowed in the final laps, while Duval had a muted run to sixth after pitting at the end of the opening lap.

Rast's recovery was less remarkable than the one he achieved by winning a day earlier, but he nevertheless fought his way back into the points, finishing seventh ahead of Muller.

Timo Glock started 17th after he stopped on track in qualifying but battled to ninth in his Team RMR BMW, despite being passed by both Rast and Muller in the second half of the race.