With Saturday races reintroduced for the first time since 2002, the same brand has won both days of each weekend so far this season.

Audi won at Hockenheim and then dominated the Lausitzring round, followed by romps for Mercedes at the Norisring and BMW at Zandvoort.

Headed by BMW's DTM-record sweep of the top seven in Zandvoort's Saturday race, manufacturers have generally won in packs, with an all-Audi top five and all-Mercedes top four also recorded.

"I think what is new, or quite obvious in comparison to previous years, is that you always tend to have these manufacturer block results, if you want to call it that," Gass told AUTOSPORT.

"I honestly don't quite understand why we have it that extreme, as we do see it nowadays.

"I think for the championship, that's probably not what spectators want to see and not what we want to see."

The DTM's performance weight system has played a role, with Audi's drivers carrying extra ballast in recent rounds on account of its strong start.

With 2.5kg blocks added and removed within a 35kg window around 1120kg, based on a manufacturer and driver's results, BMWs were around 20-25kg lighter than Audi and Mercedes at Zandvoort. 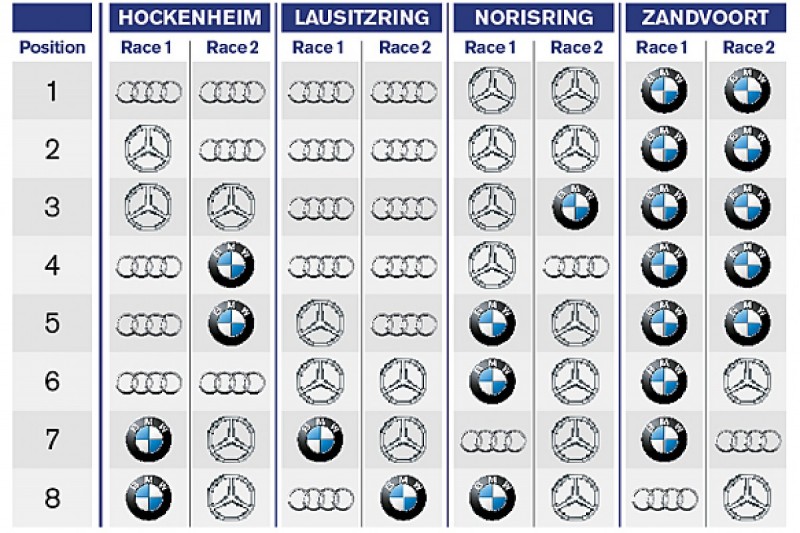 "I don't think you can understand everything simply with the weight," Gass said.

"We have had many, many good results here, as well as last year, we won, and I think we would have even deserved a better result.

"You need to look at the upcoming races and see if these block results are going to change or not."

WEIGHT ALLOCATION COULD BE REVIEWED

While performance weights are currently allocated for a whole weekend, race-by-race adjustments were discussed as an option for 2015, and the topic could be revisited.

"At the end of the day, we found that not changing the weights during the weekend would be the better solution," Gass said.

"I think that's even more difficult to explain, if you have changes during one weekend. It's difficult enough to explain from one weekend to another.

"The decision was made at the time, I did support that decision.

"If we look now, and we have to judge whether that was the right decision or not, I think maybe we need to look at it in a couple of weekends more."