Toyota can beat Peugeot to 2018 Dakar Rally victory if it keeps up during the opening stages in Peru, reckons Toyota Gazoo Racing team principal Glyn Hall

Toyota has yet to win the Dakar, and the Hiluxes were roundly beaten by Peugeot's two-wheel-drive buggies last year but regulation changes ahead of the 2018 rally have left the French manufacturer doubting its status as favourite.

Asked whether Toyota was now ahead of Peugeot in the competitive order, Hall told Autosport: "I hope so - obviously at the moment I don't know.

"All I know is, we are faster than before. How much - I don't know, we'll see. But for sure we're faster than we've ever been, that is clear.

"If we can race with the Peugeots, then we must try and hold them through the dunes in Peru. And if we can do that, maybe we'll be OK." 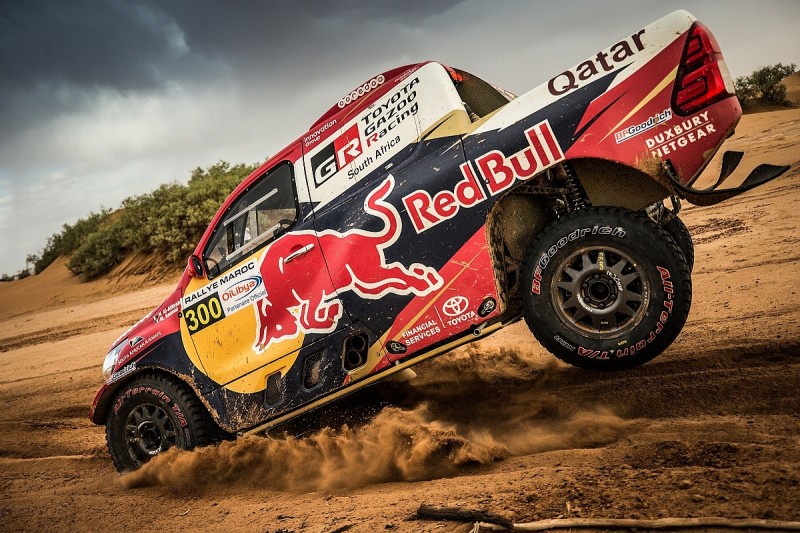 The Dakar is in Peru, which it last visited in 2013, for the opening five stages, using a route largely comprised of sand dunes.

Hall admitted he still had concerns over the high-altitude running on the Bolivian Plateau, where Toyota's normally-aspirated engine has usually struggled against Peugeot's twin-turbo diesel.

"I think on the tight off-piste road, we have a very good chance, and in the rally road in [Bolivian capital] La Paz area - but we are hoping that even in the sand dune we will be similar pace," Hall said.

"If we are like this, we'll be happy, and of course we still have the worry for the altitude for our normally-aspirated engine.

"I'm hoping we will be the same [as Peugeot] in most places, and then a little bit better in some places, that is my... not dream, but that is our wish."

Buggy "sitting in the workshop"

Toyota had developed its own version of the two-wheel drive buggy back in 2016, dubbed the Hilux Evo, but decided it was not ready to contest last year's Dakar and is unlikely to proceed with it.

"We developed a buggy last year, and for the future we knew that the regulations would be more equal, the new regulations, for 2019, so we focused on 4x4," he explained.

"But a lot of this car used the development and experience from the buggy, so we can have both ways of thinking, at a high level."

"That, at the moment, is our decision. It is sitting in the workshop," he said.

"We don't want to sell it - maybe next year or two years, maybe we might, but for now there's a lot of technology we don't want to be seen or be known to other people, we've made the decision just to keep it."