Sebastien Loeb retired from the 2018 Dakar Rally on day five, as his Peugeot team-mate Stephane Peterhansel went fastest and stretched his lead

He could not resume without outside help and lost almost three hours before finally receiving assistance and carrying on with the stage.

But with co-driver Daniel Elena in pain after sustaining a tailbone injury, Loeb was soon forced to withdraw, with the crew instead heading straight to the Arequipa bivouac for Elena to undergo a medical examination.

With the WRC legend ruled out, his Peugeot team-mates Peterhansel and Carlos Sainz were left standing as the two frontrunners in the car class. 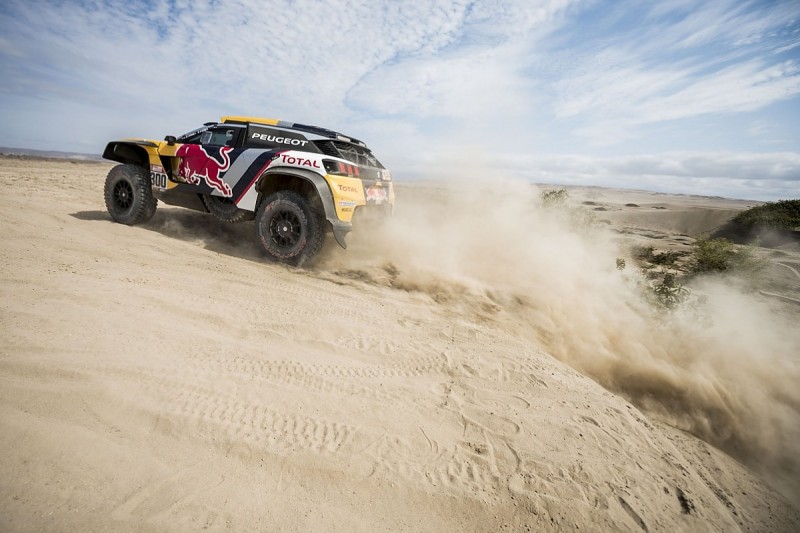 Peterhansel bolstered his chances of a 14th Dakar victory with his first stage win of the 2018 event, beating his nearest rival - Toyota's Bernhard ten Brinke - by almost five minutes.

Sainz, having got stuck in the dunes early on, was 18 minutes down at the finish line, and now trails Peterhansel by over half an hour in the general classification.

Behind the Peugeot pair, ten Brinke has now moved up to third, having outpaced his Dakar-winning Toyota team-mates.

Nasser Al-Attiyah was 24 minutes off Peterhansel's pace and now trails the Peugeot ace by an hour and 23 minutes in fourth overall, with team-mate Giniel de Villiers a further 11 minutes down after having finished the stage in third place.

The bigger threat to Peterhansel's supremacy on the day had come from Yazeed Al-Rajhi of X-raid Mini.

Al-Rajhi, out of contention for overall honours following his early collision with team-mate Boris Garafulic, threatened to give X-raid's new buggy its first stage win, but was delayed by half an hour through the final waypoints.

The stage marked the end of Dakar's all-Peru opening leg, as the rally will begin its high-altitude phase and head to Bolivia's capital La Paz on Thursday.