Peterhansel was 'probably too fast' in crash that cost Dakar lead

Peterhansel, a 13-time Dakar winner, had emerged as a runaway leader after an attrition-heavy opening leg of the event in Peru.

He looked set to extend his lead further during Saturday's La Paz - Uyuni stage, but damaged his left-rear suspension and spent more than an hour and a half at a standstill.

Peterhansel said this incident was nowhere near as galling as his biggest Dakar heartbreak - the mechanical failure that robbed him of a first car-class win in 2003 - but conceded it was still a major disappointment.

"The worst [experience] was when I had not yet won in cars, and I was leading from the first day until the penultimate day and everything went wrong," he said.

"The first victory in cars had slipped through my hands and that was hard.

"But here it just pisses me off. It makes me mad for the Peugeot team, for Jean-Paul [Cottret, co-driver], and for myself.

"It won't change much in the end for my career. I don't have regrets, we were going fast and I never saw what we hit, I don't even know if it was a rock, or a piece of wood.

"We were probably going too fast."

Peterhansel said the damage to his car after the incident was so extensive he had to "cannibalise" the 3008DKR Maxi of team-mate Cyril Despres, who is playing a supporting role after he had lost an insurmountable chunk of time earlier in the rally. 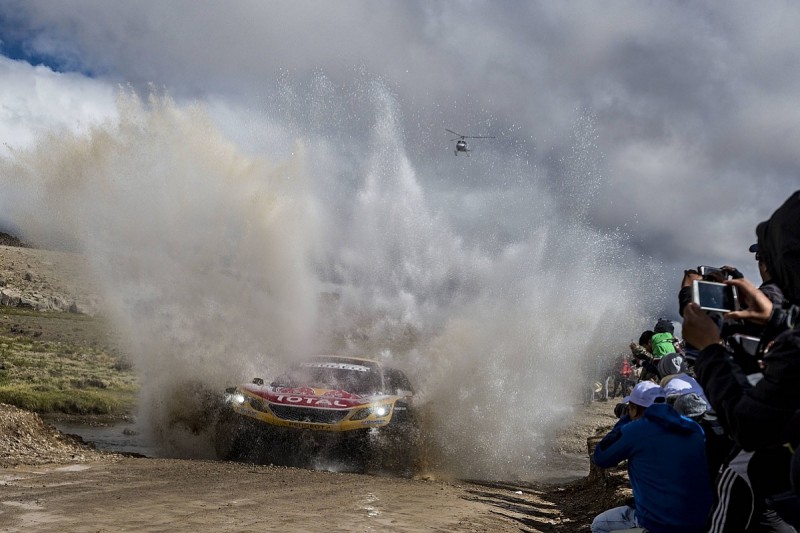 Explaining his crash, Peterhansel said: "There was a big water puddle and a quad that had stopped, for some reason, so I moved over and then I heard a huge bang, of an incredibly violent nature.

"We tore apart all of the rear assembly: suspension, transmission, shocks, we destroyed everything.

"We started to take things apart and we waited for Cyril and unfortunately he had a few problems in the first few kilometres so he took longer to arrive but then we cannibalised his car.

"We took the two shocks, two suspensions, two brakes. He did an amazing job.

"We helped him take parts off his car. Ours was ready to receive the parts."

Peterhansel completed the stage at a competitive pace despite the damage and now sits third overall, trailing rally leader and team-mate Carlos Sainz by an hour and 20 minutes.

Sainz is the only one of Peugeot's four works drivers who has enjoyed a drama-free Dakar so far, with Peterhansel's crash adding to Despres' earlier woes and Sebastien Loeb's retirement.