Al-Attiyah headed the pack for much of Wednesday's third stage and looked set to wrest the overall lead away from Loeb at the day's end, only for Al-Attiyah's Toyota Hilux to sustain significant damage, forcing him to stop.

After the first two days were run close to sea level, Wednesday's Argentina-based Tucuman - Jujuy test featured a major spike in altitude ahead of the rally's arrival in Bolivia.

The timed stage was split into two sections, a 240km opener and a 124km follow-up, linked by a neutralised road section where the cars climbed more than 5000m above sea level.

Loeb entered the day with a 28-second lead over Al-Attiyah, but his advantage soon disappeared, as the Qatari made up four minutes during the navigation-heavy opening kilometres.

Through the remainder of the first timed section, Al-Attiyah was instead challenged by Peterhansel, but managed to keep the Frenchman at bay, entering the neutralised zone with a two-minute advantage.

But Al-Attiyah's charge came to an end soon after he resumed timed running.

He badly damaged a wheel off-piste and ground to a halt.

He remained stationary for around an hour before resuming the stage, only to stop again shortly after. 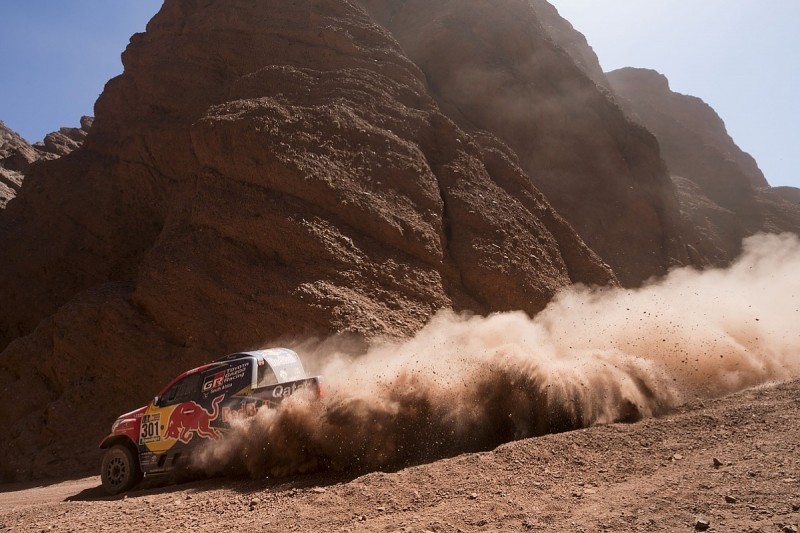 With Al-Attiyah stranded, Peterhansel eased to stage victory, with Carlos Sainz Sr and Loeb making up a Peugeot 1-2-3.

X-Raid Mini's Mikko Hirvonen ran inside the top three for much of the stage, but eventually dropped back to fourth.

The Finn now sits best of the rest behind Peugeots in the main classification, trailing Loeb by 9m38s.

Al-Attiyah's dramas were far from the only bad news of the day for Toyota, as Nani Roma, Giniel de Villiers and privateer Erik van Loon all stopped in the second part of the stage.

Of the trio, Roma came off best, losing only a few minutes and finishing fifth, just ahead of Yazeed Al-Rajhi's X-Raid Mini and the fourth factory Peugeot of Cyril Despres.

De Villiers dropped to 35 minutes off the lead as a result of his stoppage.