Ash Sutton kicked off his bid for a second successive British Touring Car Championship title in style by snatching pole position in a thrilling qualifying session at Thruxton.

Times tumbled dramatically in the final stages as the field moved onto slick tyres after a damp start to the session, and it ended with Sutton’s Laser Tools Racing Infiniti Q50 pipping the BTC Racing Honda Civic Type R of Josh Cook by 0.053 seconds.

As he had in free practice, Sutton sat atop the times as the field ran on wet-weather Goodyears, his Infiniti over 0.3s to the good over the Team Dynamics Honda of returning three-time champion Gordon Shedden.

Hill and Butcher then traded pole again, and it was the Toyota sitting at the top of the times as the chequered flag fell.

Unfortunately for both of them, they hit traffic on their final laps, and fell to fifth (Butcher) and seventh (Hill) as others gazumped them.

“The wet conditions, we’ve been thriving in all day,” said Sutton of his pole-winning performance. “The balance was mega then, but then we started hearing that the boys were going out on slicks, so it was, ‘OK, let’s dig deep.’

“The front-wheel-drive cars generate heat in the tyres better, but we came through in the end.”

Cook added: “I’m gutted to miss out on pole, and it’s always got to be Ash, hasn’t it?! But well done to him.” 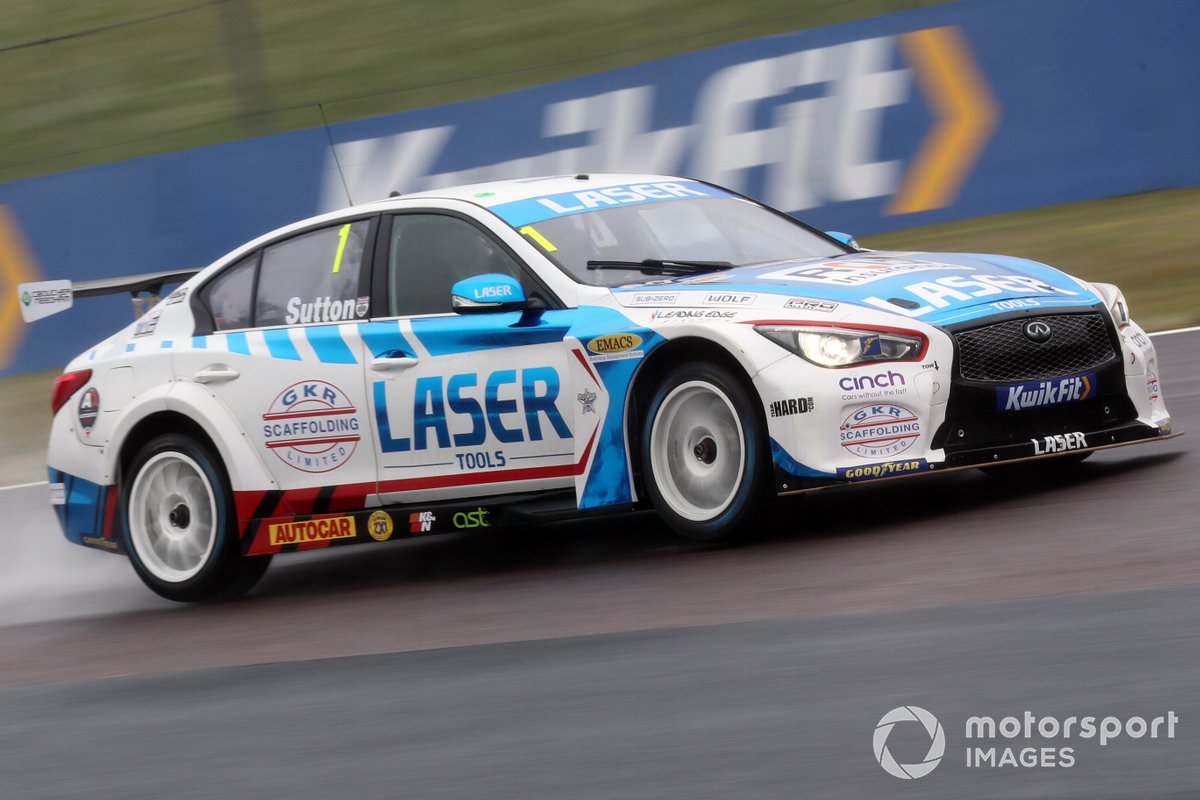 Four-time champion Colin Turkington came through to take third on the final lap with his WSR BMW, having got one lap fewer on slicks than both of the front-row men.

Alongside Turkington on the second row will be the Excelr8 Motorsport Hyundai i30 N of Tom Ingram, whose last-lap best briefly put him on pole before Sutton, Cook and Turkington came through.

Butcher lost time on the run to the line with a massive slide out of the chicane after passing another car, but heads the third row from Oliphant, who got in a full 15-lap run on the slicks.

Hill was badly baulked in the chicane on his final flier by Jason Plato, and he will start on the fourth row alongside Shedden, who got onto slicks too late to make the same progress as the other leading contenders.

Rounding out the top 10 were the second Motorbase/MB Ford of Ollie Jackson, and the second Excelr8 Hyundai of Chris Smiley.

Plato ended up 11th, just ahead of the BTC Honda of Dan Cammish.