Cook, who started his BTC Racing Honda Civic Type R from third on the grid, took the lead at the Complex on the opening lap and was not headed thereafter.

Key to Cook’s early progress was his good start or, as he described it, “I think the others might have got off the line badly, which slightly exaggerated my better start.”

Cook was instantly ahead of second qualifier Jake Hill’s Motorbase-run MB Motorsport Ford Focus, and then swept around the outside of polesitter Dan Rowbottom’s Team Dynamics Honda into the Complex to claim the inside line for Cobb and the race lead.

Hill then recovered second place from Oliphant with a daring outside move into the chicane, and the leading trio ran in close formation for several laps.

By the eighth of 16 laps, Cook had inched the gap out to over a second and, although Hill never gave up, the Bath racer took the flag 1.360 seconds in front.

“The start made the race a lot easier,” said Cook, who was carrying 33kg of success ballast on his Honda to the 39kg of Hill’s Ford.

“But it’s never easy around here – you never know how much to take out of the tyres and you have to gauge the gap.”

Oliphant, whose surrender of second place on the opening lap had been hastened by understeer at Church, in turn kept the pressure on Hill.

But then another Church understeer moment forced the ballast-free Oliphant to settle for the final podium position on a circuit he has never enjoyed. 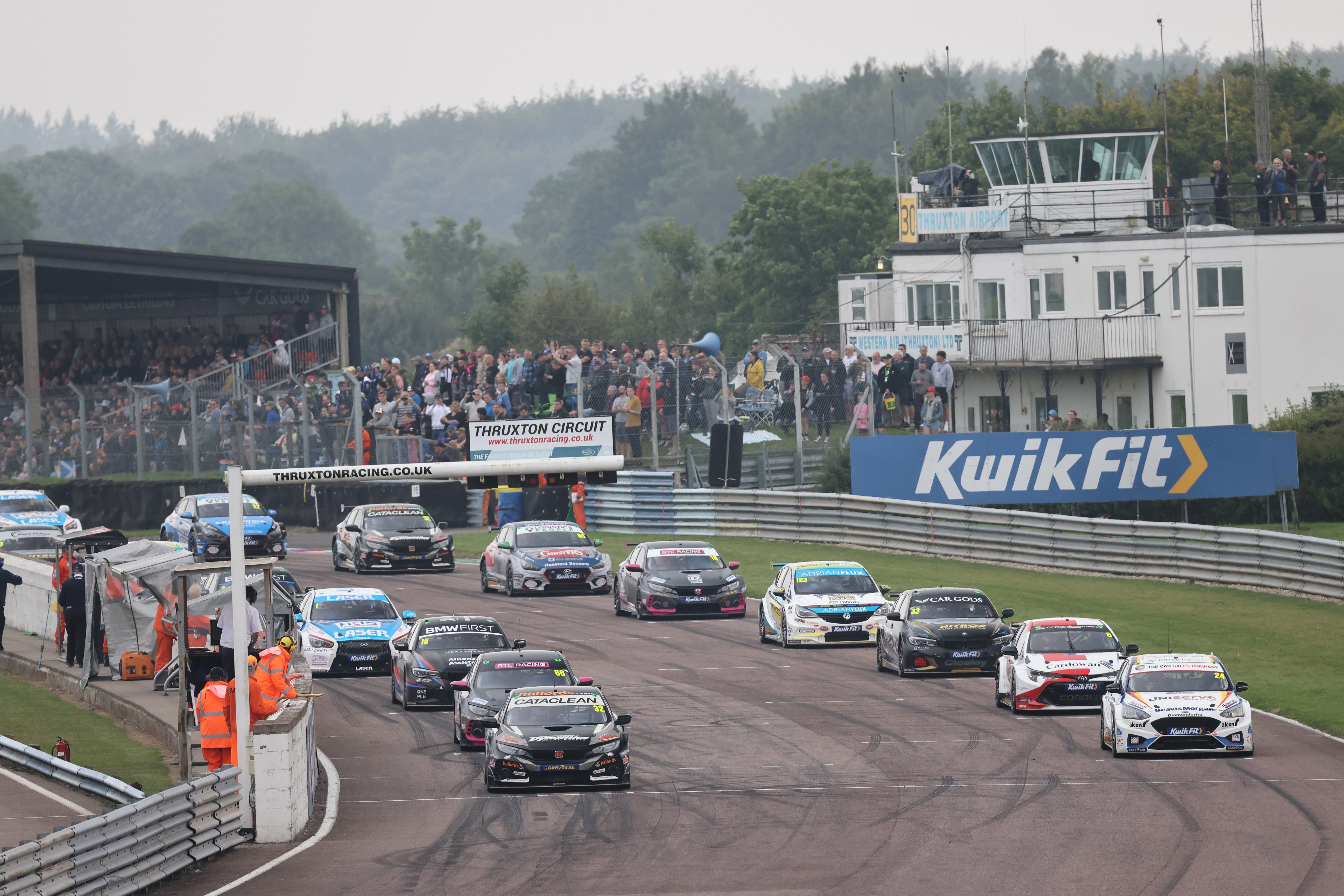 Hill, for his part, was delighted to claim his fourth podium finish from four Thruxton BTCC races so far this season.

Behind the leading trio, Rowbottom held fourth in the early stages, while Speedworks Motorsport Toyota Corolla driver Rory Butcher got past the fast-starting Ciceley Motorsport BMW of Adam Morgan for fifth on lap two.

Butcher mounted an attack on Rowbottom into the Complex on the fifth lap, and clattered into the Honda, but Rowbottom held his nerve and edged Butcher out wide to defend the position.

Four laps later Butcher got it absolutely right with his move on Rowbottom at the Complex, and championship leader Ash Sutton was also able to sweep his Laser Tools Racing Infiniti Q50 ahead of the Honda around the outside into the following Noble kink.

Sutton, with the full 75kg of success weight on his Infiniti, applied ferocious pressure to the ballast-free Toyota of Butcher for the rest of the race, but the Scot held firm.

Behind Rowbottom (sixth) and Morgan (seventh), Dan Lloyd held a train of cars at bay in his Power Maxed Racing Vauxhall Astra, only for a five-second penalty for an out-of-position start to demote him to 11th.

Up to eighth, therefore, came the BTC Honda of Senna Proctor, while the second PMR Vauxhall of Jason Plato swept around the outside of Tom Ingram’s Excelr8 Motorsport Hyundai i30 N (on 66kg of ballast) at the chicane on the penultimate lap for ninth.

Ingram’s loss of momentum almost deprived him of another position to Colin Turkington’s WSR BMW (57kg ballast), which had been nerfed wide in contact with Proctor on the opening lap, but he just held on at the Complex for 10th.

After his qualifying woes, Gordon Shedden (Dynamics Honda) could progress only to 13th.