Thruxton maestro Josh Cook survived a crazy opening lap of the first British Touring Car Championship race of the season to take his fifth victory at the Hampshire speedbowl.

Cook then tried to repass Turkington around the outside into the Complex, and in trying to defend his position the four-time champion nerfed Sutton’s Infiniti into a spin.

Contact was also made side to side between the BMW and the Honda, folding in Turkington’s wing mirror.

Cook had a wild slide at the super-fast Village right-hander, and his bid to defend from Turkington slowed both, allowing Tom Ingram to slice past the BMW into Church at the wheel of his Excelr8 Motorsport Hyundai i30 N.

Turkington then ran wide at Church, allowing Jake Hill up to third and, unable to get a full view behind him due to his folded-in mirror, Turkington inadvertently forced team-mate Tom Oliphant off track and into a spin at the Brooklands kink.

Further back, a hefty shunt between Gordon Shedden and Chris Smiley at the Noble left-hander triggered a safety car.

Three-time champion Shedden, returning to the Team Dynamics Honda squad this season, appeared to get caught out by Ollie Jackson into Noble. That sent Shedden off to the outside, before he speared back across the track and was collected by the unlucky Smiley.

After the restart, Ingram kept Cook on his toes for a couple of laps before the Honda driver settled. The gap was over a second with nine laps remaining, two seconds with two to go, and Cook eventually crossed the line 2.298s in front. 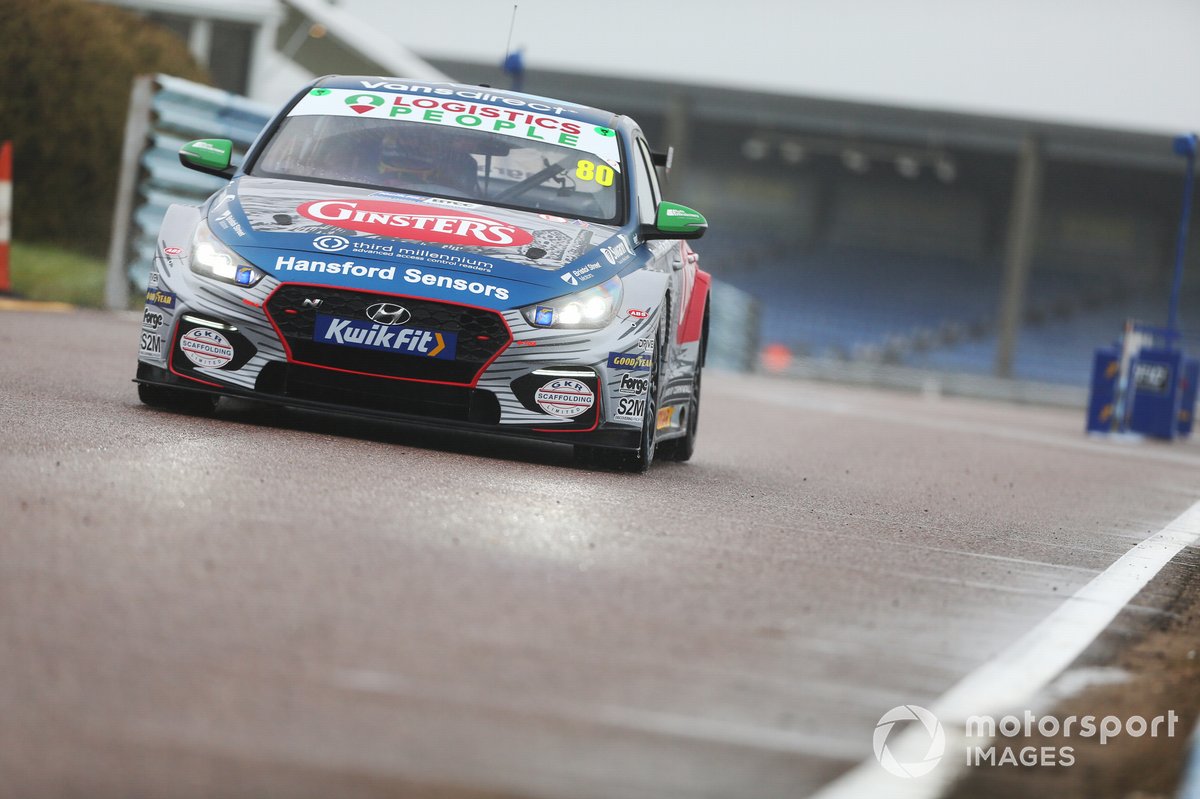 “We had a good day yesterday, and we just needed to try and convert it,” said Cook. “We had to get a good start, head down and see where we were.

“I was on the outside of Colin, and I don’t know if he was trying to stop me, but he didn’t have any option if he was going to keep the place other than to get on the power [and hit Sutton].

“I’ve been in that situation before – it’s just the start of a touring car race.

“After that I didn’t want to push too hard out of the blocks, because it was the first time in the dry here this year.”

Hill did a superb job to fend off Turkington to take third place in his first race aboard the Motorbase-run MB Motorsport Ford Focus.

Turkington, who needed attention from a specialist on Saturday evening due to pain from his back, applied pressure throughout, but Hill stood firm.

However, the BMW driver was later handed a 17-second penalty after the race for the contact with Sutton, which demoted him to 10th in the final result - the place behind Sutton.

There was a terrific battle for fifth - which became fourth after Turkington's penalty - with Rory Butcher soaking up attacks from Jason Plato.

With seven laps to go, Plato’s Power Maxed Racing Vauxhall Astra got down the inside of Butcher’s Speedworks Motorsport Toyota Corolla into the Complex, but Butcher fought back at Segrave.

Plato gave Butcher a helpful shove as they exited the corner, and their lost momentum allowed Dan Cammish to cruise past both in his BTC Honda.

Butcher thereafter held off Plato, while Dan Rowbottom hovered into their midst by the end of the race in his Dynamics Honda.

Adam Morgan emerged atop a massive midfield battle early on to run a solitary eighth in his Ciceley Motorsport BMW, while Sutton charged through from 26th to complete the top 10 - before moving up to ninth after Turkington was penalised.