Tom Ingram grabbed a second victory of the season for the new Toyota Corolla in the opening British Touring Car Championship race at Snetterton, thanks to a commanding lights-to-flag run

The Speedworks driver was slightly slower to react at the lights compared to front-row rival Dan Cammish, but was never genuinely threatened on the way to a three-second victory.

Despite both starting on the soft-compound tyre, Team Dynamics driver Cammish was carrying a further 18kg of success ballast over Ingram on a circuit that traditionally punishes heavier cars.

Cammish tucked in behind the Speedworks Toyota during the opening phase of the race and set the fastest lap, but then Ingram settled into a rhythm that was up to four tenths faster per tour.

With the Motorbase Ford Focus RS of Tom Chilton in tow, the leading trio began to break away from soft-shod Sam Tordoff in fourth and points leader Colin Turkington - opting for the medium tyre.

But it then dropped down to just a two-car lead battle when the front-left tyre on Chilton's car punctured through the high-speed Coram corner and he ploughed on into the tyre wall.

No safety car was required, leaving the remainder of the 12-lap race as a sprint between the two front-wheel drive competitors, with Ingram triumphant for his second victory of the season and the 11th for the reigning independent drivers' champion in the BTCC. 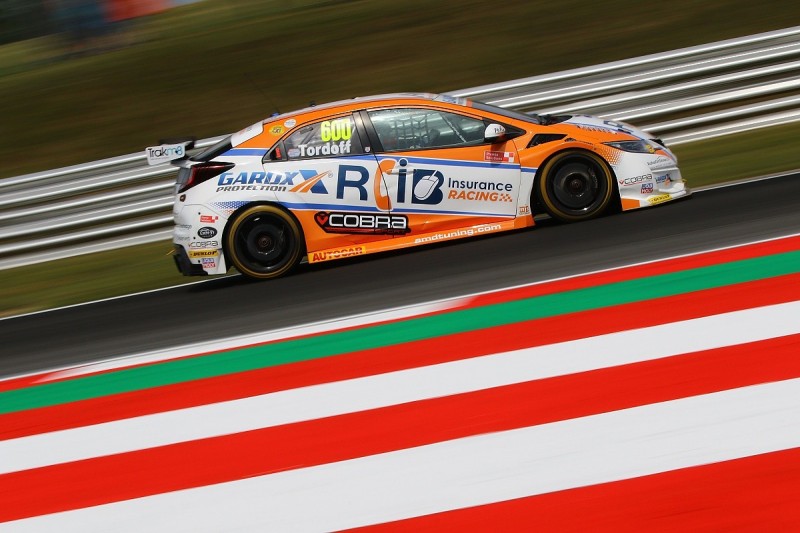 Tordoff was a distant third, over 4s behind Cammish in the AMD Tuning Honda Civic Type R, with Turkington the top medium-shod and rear-wheel drive runner in fourth place.

His WSR team-mate Andrew Jordan made a late lunge on Jason Plato for fifth place, clattering over the sausage kerbs at Nelson before sealing the position on the inside through the Bomb Hole.

Plato held off the fellow Vauxhall Astra of Rob Collard, with Ollie Jackson eighth after eliminating Matt Neal in the early stages thanks to an optimistic lunge down the inside, which appeared to damage Neal's steering.

Matt Simpson scored his best result of the year in ninth, ahead of top hard-tyre runner Jake Hill.

Aidan Moffat enjoyed a surprise upturn in form in the returning Infiniti Q50.

Despite qualifying just 29th, and although he was running on soft tyres among medium and hard-shod rivals, he climbed the car up to 17th place.