The reigning Independents Trophy holder started the race in 15th place after struggling in race one but, free from any success ballast and with the preferable softer tyres on the car, zoomed through the order to break into the top three after only six of the 22 laps.

Those ahead had more weight and Ingram capitalised with a strong exit from Becketts on lap seven to power ahead of the Ciceley Motorsport Mercedes-Benz of Adam Morgan, which was in the middle of passing the 66kg-heavy Motorbase Ford Focus of Tom Chilton.

Ingram was then able to set off after leader Sam Tordoff, who had started his Motorbase Focus from pole with 75kg of success ballast. Ingram again used superb traction out of Becketts to pull alongside his rival on the run towards Brooklands and went around the outside to take the lead.

"That was a really special win, and it was what we needed," said Ingram.

"We took the pain of the weight and the harder tyres in race one, and then we had to go on the attack because we had lost points to our rivals.

"With the calibre of the field, you can take nothing for granted and I was pushing all the way. The car was a rocketship." 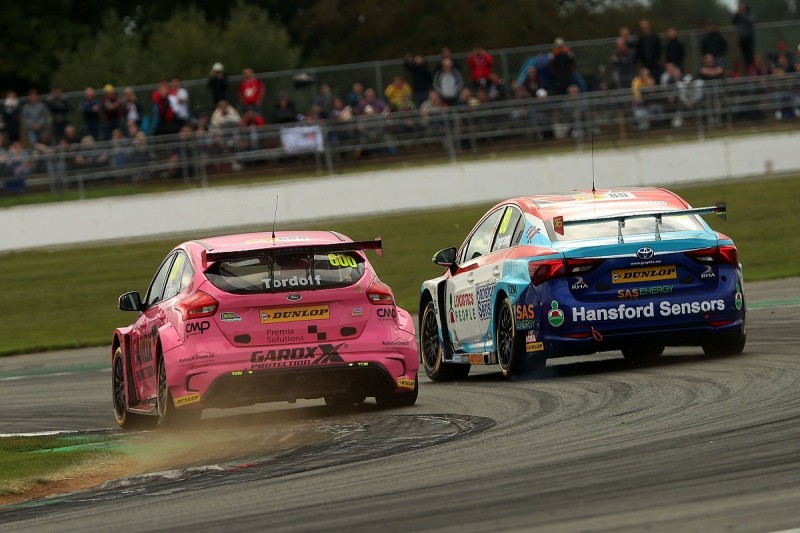 The win means that Ingram has closed the gap to points leader Colin Turkington in his WSR BMW 125i M Sport, which had hard tyres for the race and came home in eighth spot in the end. Ingram is just 36 points adrift.

Morgan was delighted with second place, but he knew that he could do nothing about Ingram.

"He was flying, and it was a question of letting Tom past at a spot where I wouldn't lose too much time and then try to hang on to him - but I just couldn't do it," Morgan explained.

What Morgan could do though was to jump Tordoff into Copse midway through. Tordoff was nevertheless pleased with third.

"It was like I was in a different race to those with no weight on their cars," he said.

"I saw Tom Ingram coming up into second place and I pushed as hard as I could and then he was right on my back bumper.

"There was no way I could hold him off - but a first and then third with 75kg on board is as perfect as it could be."

Behind Tordoff, Ricky Collard maintained his good form with fourth place, fending off a queue of cars including Matt Simpson, Jack Goff and Aiden Moffat.

Moffat was drawn on pole for the reversed grid final encounter later on Sunday afternoon.