The 2016 championship runner-up, who raced in sportscars last season, banked his lap early on within the first eight minutes of running, and was forced to wait as others tried to knock him off the top spot.

As the major players were beginning their second runs, the red flag flew to collect the stranded Eurotech Racing Honda Civic of Brett Smith, which had ground to a halt.

That left the field with a five-minute dash to improve times, but no one could lower the earlier benchmarks.

Tordoff credited his Motorbase team for turning around his fortunes at Silverstone after he had struggled during the morning's free practice sessions in 20th and 24th.

"I have come close on many occasions before this season, so it was agonising having to wait and see if someone would beat my time," said the 29-year-old.

"I was really down after the free practice sessions because we were nowhere, but the team has really turned it around.

"We have changed everything on the car and left no stone unturned, and we went one second faster this afternoon than this morning, so it is a real credit to the lads and the team." 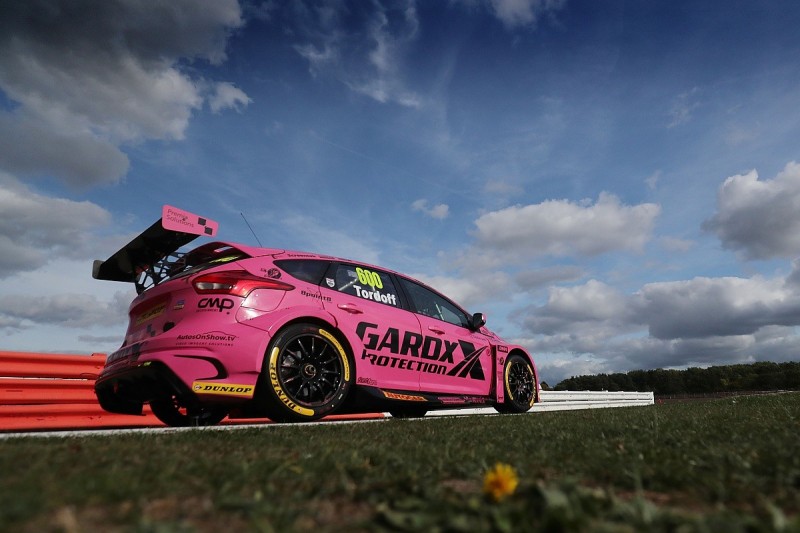 Tordoff's time was enough to eclipse the earlier benchmark set by Ricky Collard's ballast-free BMW 125i M Sport, which had benefited from a tow from team-mates Andrew Jordan and Colin Turkington to set a time just 0.018 seconds adrift.

Series newcomer Collard, only in his third BTCC meeting deputising for his father Rob who has stepped down for health reasons, said he was constantly learning more about the rear-wheel-drive car.

"I am improving all the time, and I have a little bit of experience at this circuit, which is a benefit," said Collard.

"The times are so close and if I have had a shave this morning, I probably would have picked up the 100th of a second or so that I needed for pole.

"My dad is known for his demon starts and I am going to take some lessons from him to prepare for tomorrow. I am very excited."

Tom Chilton, a winner last time out at Knockhill, heads up the second row in another Motorbase Ford, despite carrying 33kg of success ballast into the meeting.

"Previously, I have always known I have a good racecar, but this was the first time that I felt I had a strong qualifying car too," he said. "This has given me high hopes for the race."

Turkington, leading the points chase coming in to the meeting, could only struggle to 18th in his car laden with 75kg of success ballast.

His main rival Tom Ingram was 19th in the Speedworks Motorsport Toyota Avensis, which was carrying 66kg of extra lead.

Third in the championship Ash Sutton was 25th of the 31 runners in his Team BMR Subaru Levorg, one place ahead of his team-mate Jason Plato.