Moffat had been drawn on reversed grid pole for the finale and turned it into a win, although he was under extreme pressure throughout.

Jack Goff's Eurotech Honda Civic was running second before he was forced to take a drivethrough penalty for an out of position start.

He quickly worked his way through the hard-tyred cars ahead and assumed second when Goff pulled in.

It took Turkington, who had started in eighth spot, longer to work his way to the front.

He was in a big queue of car and had to battle his way ahead of Rob Austin's HMS Racing Alfa Romeo to reach third spot.

He tracked Ingram and had a strong look on the last lap but was unable to make a pass stick.

Moffat stayed in front of the title rivals and became the 16th different winner of the year. 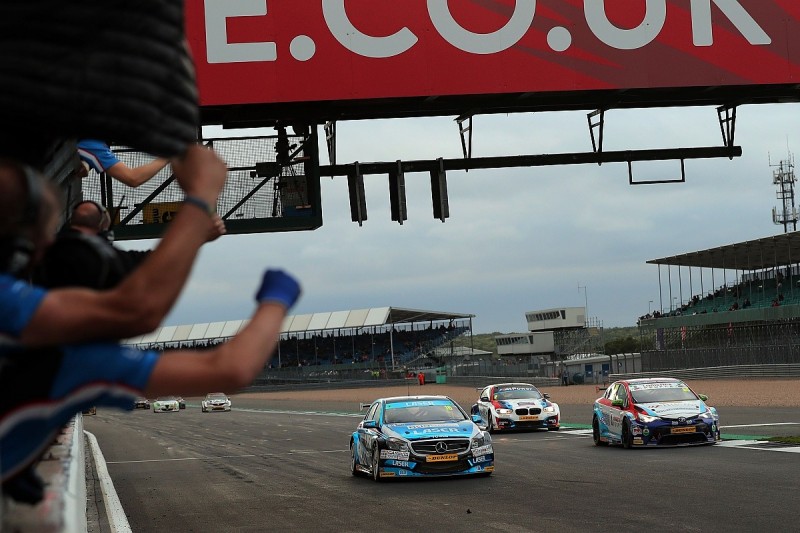 "Taking your first win is special, but this is just as emotional because I had Ingram and Turkington all over me and I had to focus hard to keep the advantage," said Moffat.

"It is a really great win, and it is a credit to all the work that the team has put in. I am delighted."

Ingram said he was being cautious, particularly with Turkington ready to pounce.

"On the last lap, I went wide into Brooklands and I knew Colin was down the inside, but I was boxing him in," said Ingram.

"It worked, but I knew that Aiden would have been desperate to win, so I just wanted to bring it home."

Turkington too said he was wary of making a rash move, and wanted to protect his 34-point buffer at the head of the standings going into the Brands Hatch decider.

"I needed to be careful, but I really enjoyed that race and it was pressure - but I had pressure for breakfast this morning," he said.

"It was about landing the points and not doing anything rash. I was trying to go for second, but there was no way through for me."

Josh Cook battled his way away ahead of Austin too for fourth.