The 2013 champion started on the front row and tracked Tom Ingram's Toyota Avensis over the opening seven laps, before Jordan lunged for the inside going into the Becketts hairpin.

Though both were on the soft tyres, Ingram then dropped back while Jordan's pace held up.

Adam Morgan's Mercedes-Benz A-Class came up to challenge Jordan, but the Ford man held on despite a late safety car to clear up debris on the circuit.

"I was worried about the safety car, because the softer tyres cool and then they don't work so well after that - but after the caution period was over, I just went for it," Jordan said.

"I had looked after the tyres early on, it is a technique I have perfected. That really worked for me at the end of the race."

Behind Morgan in second, Ingram was forced into defensive action to fend off the flying Subaru Levorg GTs of Colin Turkington and Jason Plato, which shadowed the Toyota over the line. 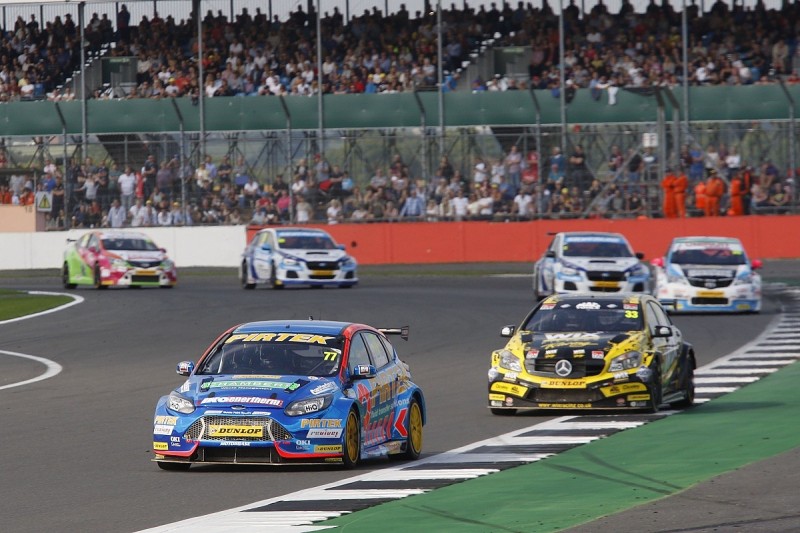 Mat Jackson brought his Motorbase Ford Focus home in sixth position despite starting in 17th position on the grid, although he was on the more favourable medium tyres.

Rob Collard was on the softer tyres and grabbed seventh place in the WSR BMW 125i M Sport, but he was coming under threat over the closing stages from Gordon Shedden in the factory Honda Civic Type-R.

Shedden had started in 23rd place after problems in race one but, now free of weight, the Scotsman flew through the pack.

The top 10 was rounded out by Scot Aiden Moffat, in the Ciceley Racing Mercedes-Benz A-Class, and Hunter Abbott in the Power Maxed Racing Chevrolet Cruze.

Championship leader Sam Tordoff brought his WSR BMW home in 11th position and was three places ahead of rival Matt Neal's Honda so extended his lead.

The MG6s of Ash Sutton and Josh Cook, starting from the back with full weight after being excluded from their one-two in the opener for a rear wing infringement, battled back to 17th (Cook) and 26th (Sutton, after an early pitstop).

The reversed grid draw, by former BTCC frontrunner Paul Radisich, came out at number eight, which put Shedden on to pole for race three.