The ex-British Formula 3 race winner used the rear-wheel-drive advantage of his Audi A4 to leap past Andrew Jordan's polesitting Honda Civic and Mat Jackson's Motorbase Ford Focus at the start to lead.

Gordon Shedden took just two laps to work his way past Jordan and Jackson to be second, but he could not keep pace with the Audi as Austin worked his way clear to a 3.3-second win.

Jackson looked set to complete the podium for much of the race, but he lost out to the WSR BMW of Colin Turkington, who dived through on the inside line at Gracelands with two laps left.

Turkington's WSR team-mate Rob Collard was in contention for a podium finish too, but retired along with Matt Neal's Dynamics Honda Civic on lap 10 of 16.

Collard ran soft tyres for this race and put in a combative drive to climb as high as fourth in the early stages. He looked set to challenge Jackson for third until he locked up heavily under braking for the Deene hairpin, picked up a puncture and then retired to the pits.

Neal also looked good, having climbed into the top five from 14th on the grid after spinning under the safety car in race one, but he suddenly straightened up and stopped at Deene, lightly tagging Collard's BMW as it ran wide during its moment under braking.

Neal has now slipped to third in the points, behind team-mate Shedden. 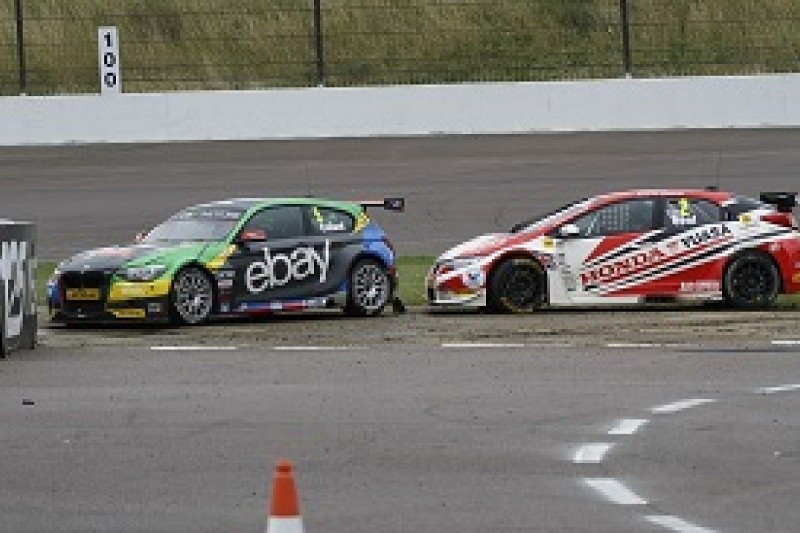 Jackson ultimately just held off Sam Tordoff's Triple Eight MG6 to finish fourth. Tordoff started way back in 16th after suffering an intermittent engine misfire in race one, but climbed through the top order impressively in this race to finish four seconds clear of team-mate Jason Plato, who started fifth.

Dave Newsham's Speedworks Toyota Avensis looked racey in the early stages and ran as high as fourth after starting eighth on the grid, but he slipped back to seventh before the finish.

Points leader Andrew Jordan - running the maximum 45kg of success ballast in his Eurotech Honda - struggled for speed throughout the race and finished a subdued eighth after starting on pole.

Tom Onslow-Cole charged to ninth from near the back of the grid, after getting caught up in a midfield incident in race one and losing the brakes on his Motorbase Ford Focus, while Jeff Smith completed the top 10 in the second Eurotech Honda.

Adam Morgan, Nick Foster, Frank Wrathall (who went off twice in his Dynojet Toyota), Jack Goff and Aron Smith rounded out the points finishers, while Lea Wood took a comfortable win in the Jack Sears Trophy for S2000 cars.