The Team BMR driver dragged his Subaru Levorg to the fastest time after the chequered flag had fallen, usurping team-mate and championship hopeful Ash Sutton as a late switch to slicks for the majority resulted in a raft of late improvements.

Plato's pole had initially been provisional and subject to an investigation, but was later confirmed after officials deemed his lap legal.

Sutton had been the pacesetter in the early part of the session, leading the way with an initial best of 56.517s as drivers ventured out on wet tyres with the circuit still damp after an afternoon shower.

Sutton rotated on one of his flying laps but was able to resume and went faster still before a red flag to re-place an advertising hoarding.

Few drivers managed to improve between that red flag and another stoppage to swap the hoarding altogether, but by the time the second red flag period had ended drivers started to try slicks.

Gordon Shedden had briefly set the pace on dry tyres in his Team Dynamics Honda Civic Type R but the rear-wheel drive powered cars soon came to the fore, with Sutton and team-mate Plato heading to the sharp end of the grid.

A number of improvements pushed them back down the order before the chequered flag fell but Sutton leapt back to the top of the times with his final lap, only for Plato to deny by 0.089 seconds.

It was the first pole Plato has achieved in the BTCC since the championship visited the Scottish circuit last season. 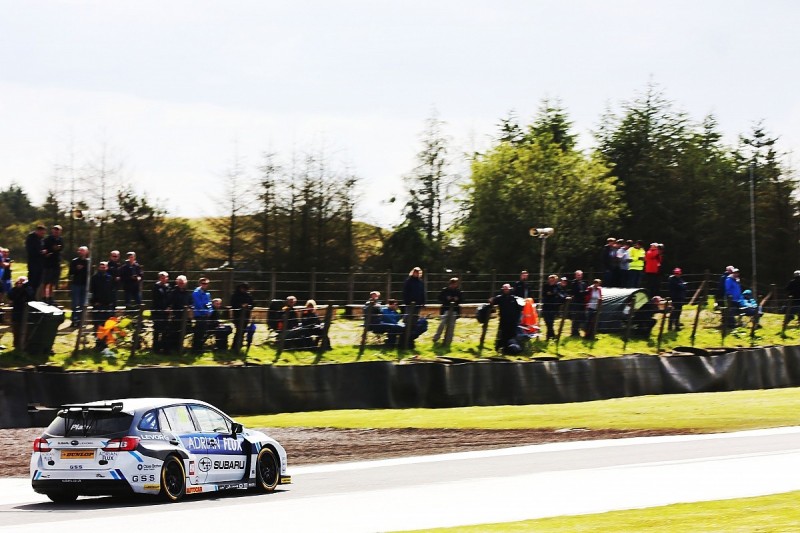 "My car still isn't great in the dry - we were missing out at the Chicane and into Clark's - but I was able to control the pace in the mixed conditions and that played to my strength with my experience," said Plato.

"I am pleased with pole, but I am mindful that I need to help Ash Sutton's position in the championship tomorrow."

Behind the Levorg pair, WSR BMW duo Colin Turkington and Rob Collard will share the second row of the grid for Sunday's opening race in their 125i M Sports.

Neither driver had an answer to the pace of the Subaru pair, with Turkington a third of a second off the pole-setting effort and Collard some six tenths down.

Tom Ingram was the best-placed of the front-wheel drive runners in fifth in his Speedworks Motorsport Toyota Avensis, ahead of the third Team BMR Levorg of James Cole and Power Maxed Racing Vauxhall Astra driver Senna Proctor.