Team BMR Subaru Levorg driver Plato snatched his 50th career pole with his final qualifying lap on Saturday, and converted that into a first corner lead at the start of Sunday's first race.

Plato and Sutton were quickest over the first couple of laps, but were soon caught by the WSR BMW 125i M Sports of Colin Turkington and Rob Collard.

Despite Turkington recording the fastest lap, that BMW resurgence proved short-lived as Plato and Sutton edged clear in the latter stages of the race.

Plato tried to allow Sutton to take the lead before the start of the final lap - to hand his team-mate a point for leading the race - but was still 0.053 seconds clear across the line.

Sutton did lead most of the final lap, but moved back over out of the final corner to allow Plato back through - the two-time champion claiming his first win since the opening Knockhill race a year earlier.

"We found something in qualify that we'd thought about all year but didn't have the data to back it up," said Plato, with the issue related to the differential.

"It's a completely different car.

"It's a shame we didn't get that switch around for the point - the timing wasn't quite there." 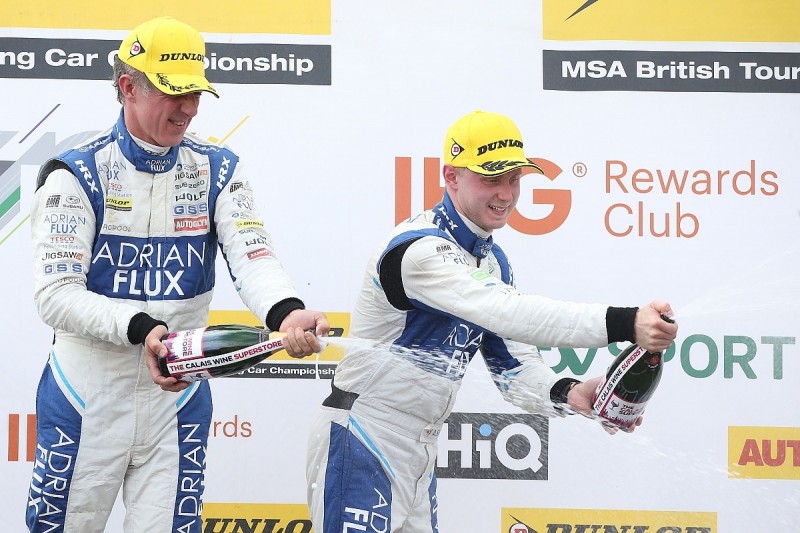 Turkington completed the podium, less than a second down on Plato, with Collard in tow as the top four finished well clear of the chasing pack.

The WSR BMW pair of Turkington and Collard now occupy first and second in the drivers' championship.

Best of the rest went to James Cole in BMR's third Levorg, after he overcame Tom Ingram's Speedworks Toyota Avensis after an entertaining mid-race scrap.

Ingram couldn't keep pace with the leaders and turned his attentions to keeping Cole at bay for fifth early on, which included a robust defence along the pit straight.

Cole ultimately forced a way through at the halfway point and gradually pulled away to secure fifth - matching his best finish in the championship.

Neal's advance from 21st on the grid was particularly impressive, and was helped by team-mate and erstwhile points leader Gordon Shedden moving over to let him by.

Shedden had dropped some five seconds to Morgan by the time he let Neal through, which left his team-mate little time to make any further progress.

But as Morgan and Dave Newsham squabbled for eighth, Neal caught the two with two laps remaining and managed to nestle between the pair before the finish in his Civic Type R.

Shedden, who started the race with maximum ballast, crossed the line in 11th and is now fourth in the points.