The Team Dynamics man recorded a 1m31 seconds (96.26mph) lap early on in the second 40-minute session building up to this weekend's three-race showdown on Sunday afternoon.

The 29-year-old, who is searching for his maiden win in the championship and carried no success ballast into the meeting, said he was delighted with the performance given his lack of experience with the car.

"I only get these free practice sessions to learn about front-wheel-drive around a track like this, the Brands Hatch Grand Prix layout," he said. "I have no personal databank to draw from, no reference points for that, and I am having to think on my feet.

"The team has worked really hard and it we have got the car hooked up. Hopefully we can now translate that into a result in qualifying this afternoon."

Sutton had set the fastest time in the opening session in the morning before an oil leak forced him to stop running in the two-litre turbocharged machine. 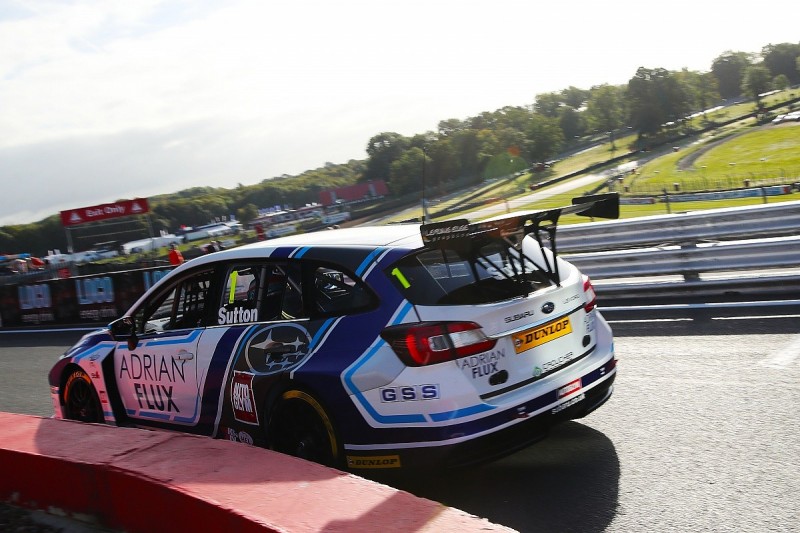 However, worse was to follow in the second timed period as he cannoned into the barrier at Paddock Hill Bend after a suspected throttle problem, causing significant damage to the car, meaning the session was stopped with five minutes left to run.

Eutotech Racing Honda Civic Type R driver Jack Goff was third with a lap set in the second free practice session, ahead of the Pirtek-backed WSR BMW 125i M Sport of Andrew Jordan.

The two main protagonists for the championship - Colin Turkington and Tom Ingram - carried 75kg and 66kg of ballast respectively.

Ingram, who is second in the points in his Speedworks Motorsport Toyota Avensis, was sixth in the opening session of the day and then placed 10th in the second with an improved time of 1m31.386s.

Speedworks boss Christian Dick said: "We've been really pleased with the balance of the car from the first moments of the opening free practice session and things are all going to plan.

"We have a car that only needs a few tweaks rather than wholesale change, so we are in a good place so far. We are not expecting to be battling for pole with the weight that we have on the car, but we are satisfied with where we are at the moment."

Turkington took his WSR BMW 125i M Sport to 15th in the opening session and then 11th in the second with an improved lap time of 1m31.413s. The Northern Irishman has a 34-point buffer over Ingram heading into the finale on Sunday.

The 36-year-old said: "We have made decent progress through the practice sessions. We needed to find a bit more [grip] from the rear axle to settle the car down after FP1 and I think we got that for FP2.

"We also found some avenues that didn't really work - but that can be a positive thing. We can eradicate those for qualifying and hopefully we will take a step forwards."