British Touring Car Championship star Jake Hill believes that the 2021 title is very much on after taking his first win of the season last weekend at Croft.

Apart from his victory in race two, Hill drove his Motorbase-run MB Motorsport Ford Focus to second place in the opener and seventh in the reversed-grid finale to move up to the runner-up spot in the championship.

Hill narrowed his deficit to championship leader Ash Sutton from 39 points to 29, and the Ford’s biggest Achilles’ heel will not be a factor over the remaining three rounds.

The Motorbase/MB squad has struggled to make the fourth-generation Focus ST work on the soft-compound Goodyear, which has been used at four events this season but will not reappear for the rest of 2021.

“With the soft tyres and 75kg of success ballast, that’s never a great mix for this car,” Hill told Autosport about his seventh position in the final race at Croft.

“There’s no lying that we struggle on the soft compared to the others, so to hold onto seventh and bring home a bag of points was a good result.

“Now I think we’re in good shape – there are other people who like the soft a lot more than we do, but now it’s gone.” 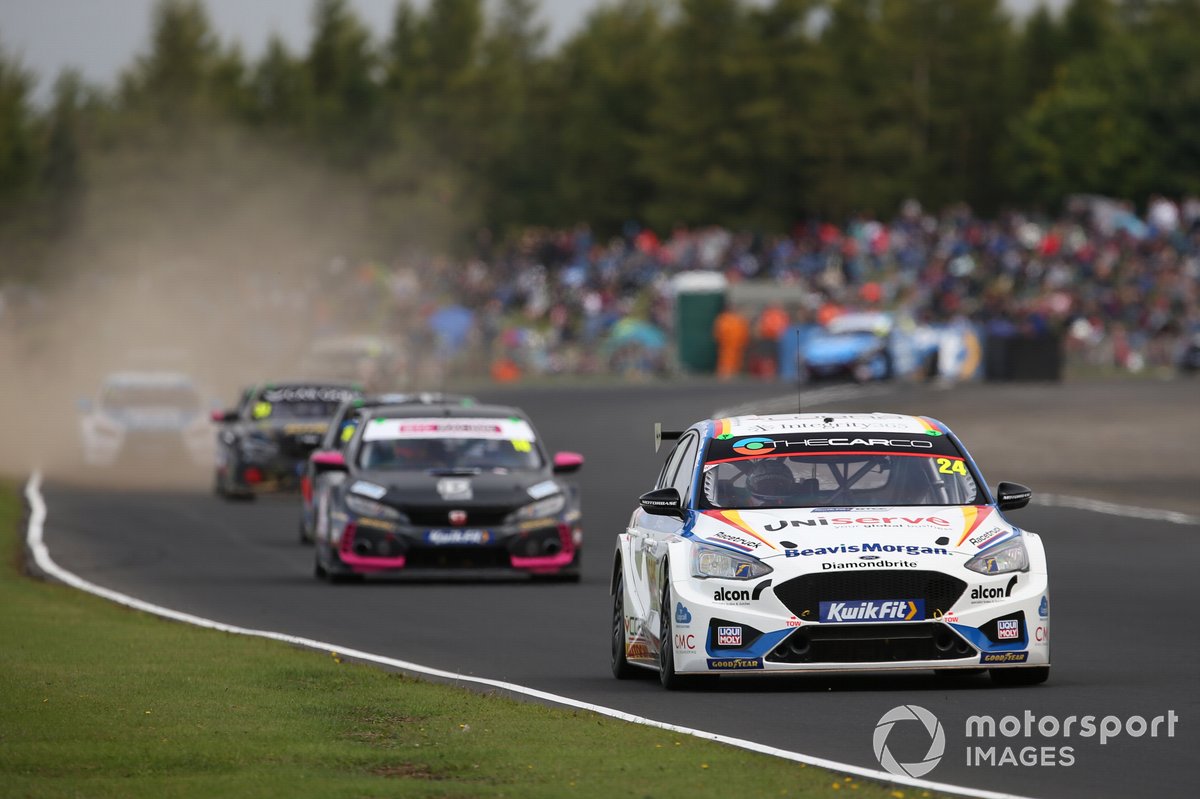 Furthermore, after this weekend’s Silverstone round, the season finishes at two of Hill’s best circuits: Donington Park and his home venue, Brands Hatch’s Grand Prix layout.

And Hill’s Ford has become recognised in the BTCC as the best-performing car on success ballast.

“I know we’re quick enough to challenge for the championship – look how we went with 66kg of ballast [for second in race one at Croft] in race two.

“There’s no reason why we can’t win it: the car’s performing well, I’m driving well, and collectively we’re in a very good place.”

Meanwhile, the driver Hill deposed from the runner-up spot in the points, Tom Ingram, is also buoyant on the eve of the Silverstone round.

Ingram scored two fourths at Croft and has dropped to fifth in the standings in his Excelr8 Motorsport Hyundai i30 N, but crucially his distance to Sutton has widened only by seven points – from 30 to 37 – and he will start the Silverstone round on just 39kg of ballast, compared to 66kg at recent events.

While Hill’s Ford has handled ballast well, Ingram’s Hyundai has struggled with weight, and qualified way down in 21st at Croft.

“All things considered, going from second to fifth in the points is a blessing in disguise,” Ingram told Autosport.

“Now we’ve got a chance of a strong weekend, because our problem is that we’ve not been able to bounce back [from starting an event on heavy ballast].

“After our Oulton Park weekend [where Ingram scored just eight points] we should have fallen back to sixth in the championship, but we stayed second and kept the 66kg, and every weekend we’ve not been able to have a good first and second race.”

Ingram, who won five races at Silverstone between 2016-19 during his years at the Speedworks Motorsport Toyota team, believes his championship challenge can restart at the venue this weekend.

“We’ve seen the points gap get hardly any bigger, but now we’re carrying fifth-place ballast instead of second.”