While Morgan was untroubled, the attention behind focused on the progress of seventh placed starter Jack Goff. After experiencing pace problems over the opening races, his Eurotech Honda Civic was flying in the finale.

He jumped to sixth at the start and worked his way into the top three by lap eight of 16.

He tracked Proctor for six laps before making his move on the inside as the cars exited the chicane at the end of lap 14. That was enough for him to claim second place behind Morgan.

"My plan worked perfectly," said Morgan. "When I got the start and reached the opening Complex in first place, I said to myself that I needed to get my head down and put in a series of qualifying laps, which I did.

"I could see Goff flying up through the order, so there was no way I could let up until the very last lap, when I knew I had it in the bag. The car was amazing."

Morgan left the circuit at the top of the championship standings by one point from Josh Cook (Power Maxed Racing Vauxhall Astra). 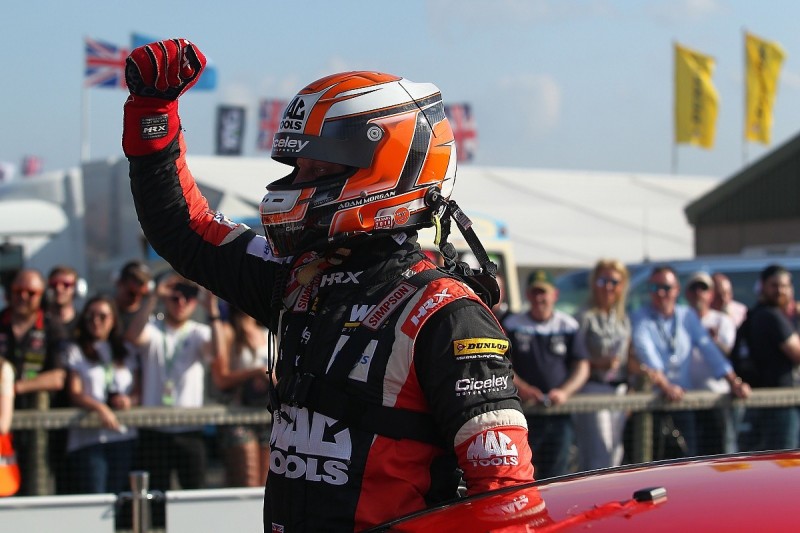 Goff said that the result had been a product of the hard work put in by his engineers throughout the weekend.

"We had struggled, and we were at a loss," he said. "But we found something on the set-up for race two and we followed it into race three. It really worked. I could see Proctor was struggling with his tyres and I am delighted with second."

Proctor said he had pushed slightly too hard in his chase of Morgan early on, which gave Goff the upper hand in the closing stages.

"I also had a warning for track limits in the later part of the race," said Proctor. "I knew I had to be careful, but I had nothing left when Goff came up to me."

Behind Proctor, Sam Tordoff (Motorbase Performance Ford Focus) took his third fourth placed finish of the weekend to round off a competitive three races. He was followed by Colin Turkington (WSR BMW 125i M Sport) and Cook.

WSR driver Andrew Jordan should have started third but was forced to withdraw from the race after he collapsed when he got out of the car at the end of race two.

He had been suffering all weekend from a virus and was taken to the medical centre for treatment.