Once again, Butcher made the most of his front-wheel-drive Speedworks Motorsport Toyota Corolla GR Sport warming up its front tyres quicker than the rear-driven BMWs can get heat into their Goodyears, and he was 1.211 seconds in front by the end of the opening lap.

This time, it was his brother-in-law Gordon Shedden who had stolen into second place, the Team Dynamics Honda Civic Type R making an inspired dive inside the BMWs of Hill and Morgan into Brooklands on the opening lap.

Hill claimed second place from Shedden on the fourth lap, and at this point he was 1.320s adrift of the leading Toyota.

By the following tour he had eroded this to under a second, and then the safety car emerged due to Dexter Patterson’s Laser Tools Racing Infiniti getting shunted into the gravel on the exit of Luffield.

Three laps after the restart, Hill forced Butcher to defend into Brooklands and then into Luffield – Hill then got a cutback on the exit and was able to complete the move into Copse as the West Surrey Racing BMW 330e M Sport sailed into the lead.

Hill had built his advantage up to almost 1.5s when the safety car emerged again, after Ricky Collard, who had been running ninth in the second of the Speedworks Toyotas, pulled off into the Copse gravel trap with a fire under the bonnet. 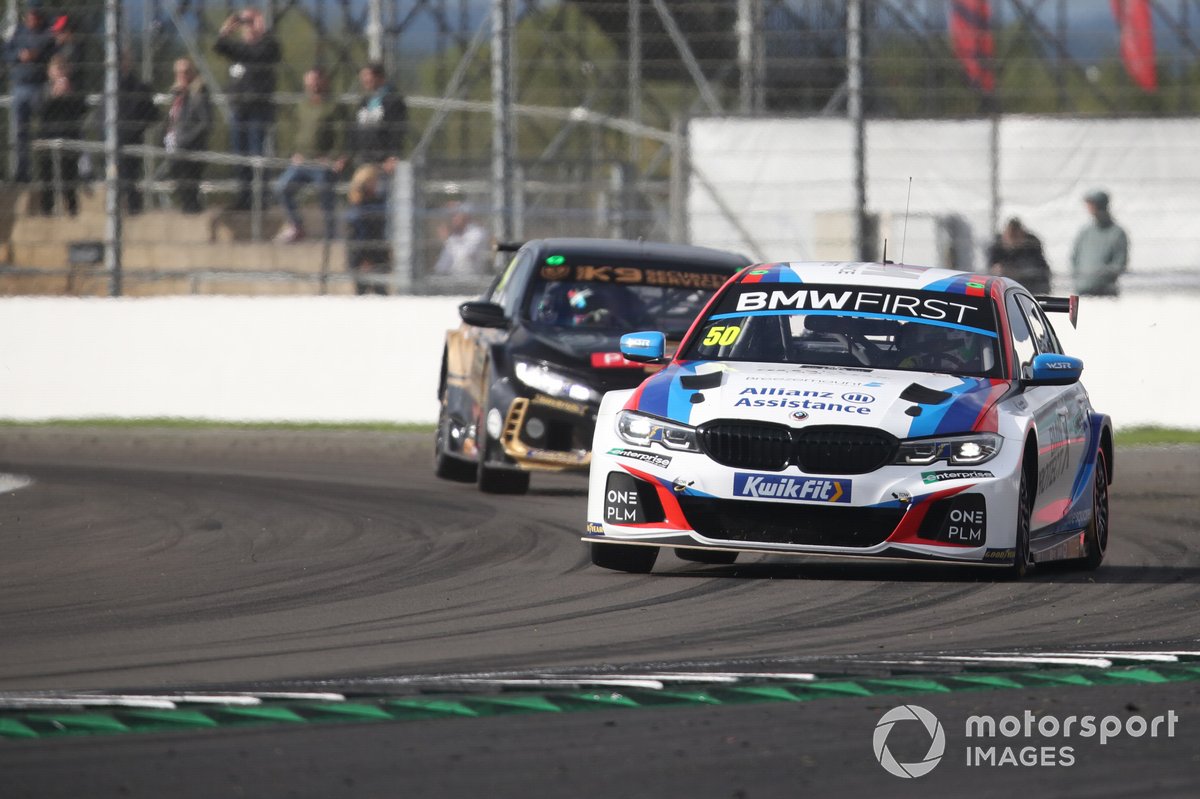 Hill caught Butcher napping on the restart with five laps remaining, nailing it on the entry to Brooklands so that he was over 1s ahead as they crossed the timing line.

As he had done before the second safety car, Butcher had to defend with all his might from Shedden to win the all-Scottish fight for second, and finished 2.092s adrift of the victorious Hill.

“It’s just such a nice feeling,” said Hill. “I was so cautious coming into this weekend, because I didn’t think the car would be where we wanted it to be pace-wise.

“Craig [Porley, Hill’s engineer who is suffering pneumonia] continues to send his support from his hospital bed, and I’m so grateful to the whole team.

Points leader Ash Sutton and title rival Tom Ingram made it a four-way scrap for second in the second half of the race.

Ingram’s Excelr8 Motorsport Hyundai i30 N frequently nibbled at the rear bumper of Sutton’s Motorbase Performance Ford Focus, but there was no way through.

Morgan came home sixth ahead of the second Motorbase Ford of Dan Cammish, while Josh Cook brought his BTC Racing Honda to the finish in eighth place and was drawn on reversed-grid pole.

Rounding out the top 10 were the Team Hard Cupras of Bobby Thompson and Aron Taylor-Smith.

Pre-weekend points leader Colin Turkington claimed 13th from 27th on the grid in his WSR BMW, and has dropped to fourth in the rankings.

Sutton now leads by two points from Hill, 11 from Ingram and 14 from Turkington.