Tom Ingram made it two wins out of two on the day at Oulton Park to move into the joint lead of the British Touring Car Championship with Josh Cook.

As he had in race one, Ingram led all the way in his Excelr8 Motorsport Hyundai i30 N, although his closest pursuer was much closer this time around than in the earlier stanza.

Reigning champion Ash Sutton’s hopes of a maiden 2022 victory with the Motorbase Performance Ford Focus team effectively ended at the start when, from the front row, he was forced to tuck in behind Ingram at Old Hall.

From then on, Sutton ran in second position to notch up his fifth successive podium finish.

Sutton set the fastest lap in the early stages, and Ingram took seven of the 15 laps to pull out a second at the front.

From then on it hovered at just over a second, before Sutton trimmed it back to 0.979s at the finish line.

“The first race was good – I could control the pace up front because people were battling behind.

“But this time Ash was keeping it fast – he kept coming back and it was to and fro. They’ve certainly got that Ford working now.”

Gordon Shedden was hit with a three-position penalty from race one for his incident with Adam Morgan, dropping him three places to sixth. 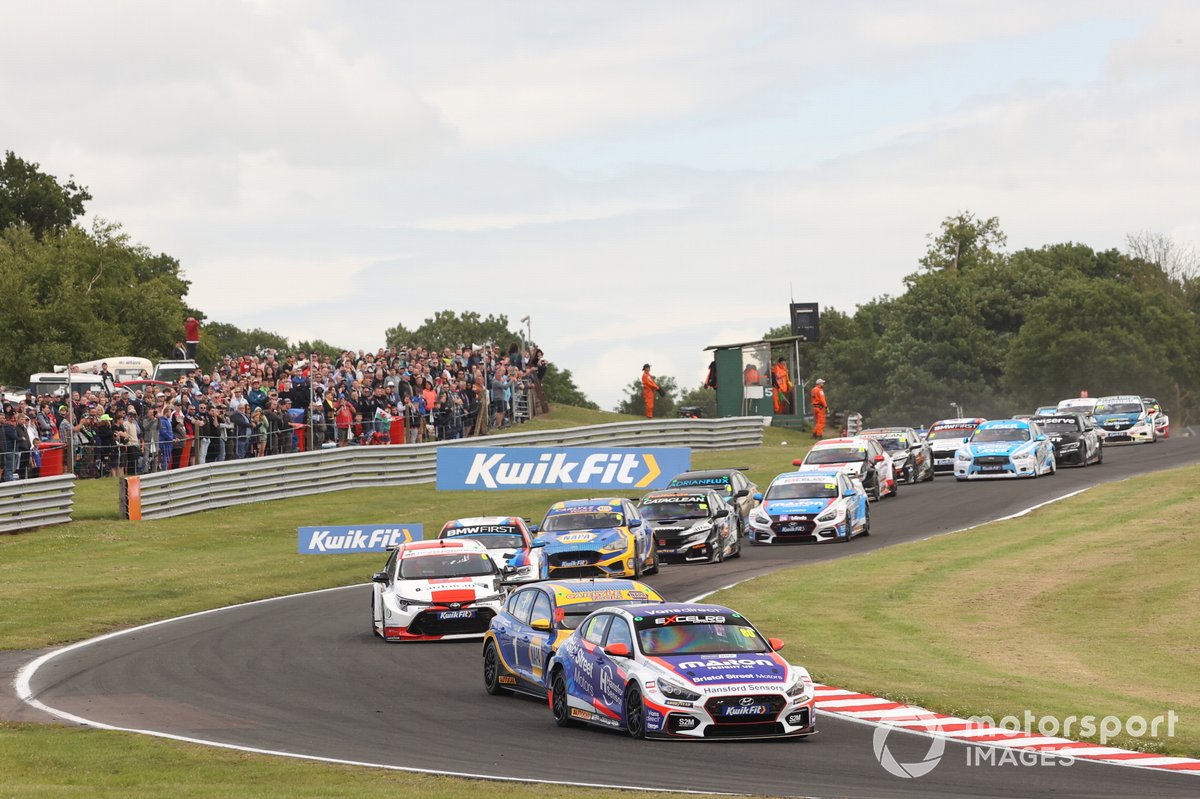 Ingram followed up his race one win with another controlled drive

That promoted his brother-in-law Rory Butcher to third, and the Speedworks Motorsport Toyota Corolla held onto this position at the start of the race.

But, as he had earlier, Butcher appeared to be unable to hold the pace of the front runners, and came under attack from the West Surrey Racing BMW 330e M Sport.

The move came at half-distance – Butcher defended the inside line into the Island hairpin, but Turkington swept around the outside of the Toyota to move up into third spot.

He then closed in on the two cars in front, and Turkington was not far off them as the chequered flag fell.

Shedden appeared a little subdued from his first-race penalty, the Team Dynamics Honda Civic Type R driver chiselling his way inside the Motorbase Ford of Dan Cammish at the Island hairpin with five laps remaining to claim fifth.

Dan Lloyd held seventh for much of the race in his Excelr8 Hyundai, but Jake Hill was on a charge and the WSR BMW got the cutback out of the hairpin with two and a half laps to go to claim the inside line for Hislops and the position.

Ingram then made his biggest mistake of the weekend – he pulled the number 12 out of the reversed-grid balls, meaning Stephen Jelley will line up on pole with Aiden Moffat alongside.