Sutton capitalised on the mistakes of first-race winner Hill to score his maiden win since joining the Motorbase Performance Ford Focus squad for this season.

Hill got a decent start from pole to hold the lead in his West Surrey Racing BMW 330e M Sport, and made a good restart after an early safety car.

The Kentishman appeared to hold all the cards, but on the second lap after the restart he ran wide at the chicane and through the gravel, allowing Sutton into the lead.

Sutton pulled out a small advantage mid-race, but Hill began to reel in the Ford once again, and with nine laps remaining they ran side by the side at the hairpin.

But, shortly after this, Hill made another trip to the gravel at the chicane, and this allowed the sister BMW of Colin Turkington into second place.

Now it was Turkington’s turn to make an error – the four-time champion ran wide at the top of Duffus Dip, ran down the escape road, and saw Hill sail back ahead of him into McIntyre’s.

There were now almost seven laps remaining, and Sutton’s tyres were fading, allowing Hill to close in once again.

As they approached the hairpin on the final lap, Hill appeared to be taking a speculative look, but it turned out to be a serious effort – he drew alongside Sutton on the exit, and there was minor contact before the Ford squirmed across the line just in front.

“It was made a little bit easier with Jake’s mistake, but I think he was just trying to match what we were doing at the chicane, and that’s been our strongest point all weekend, so I was full send every lap,” said Sutton.

“The last couple of laps my rear tyres had had enough, which shocked me, but I thought I wasn’t letting that one go.” 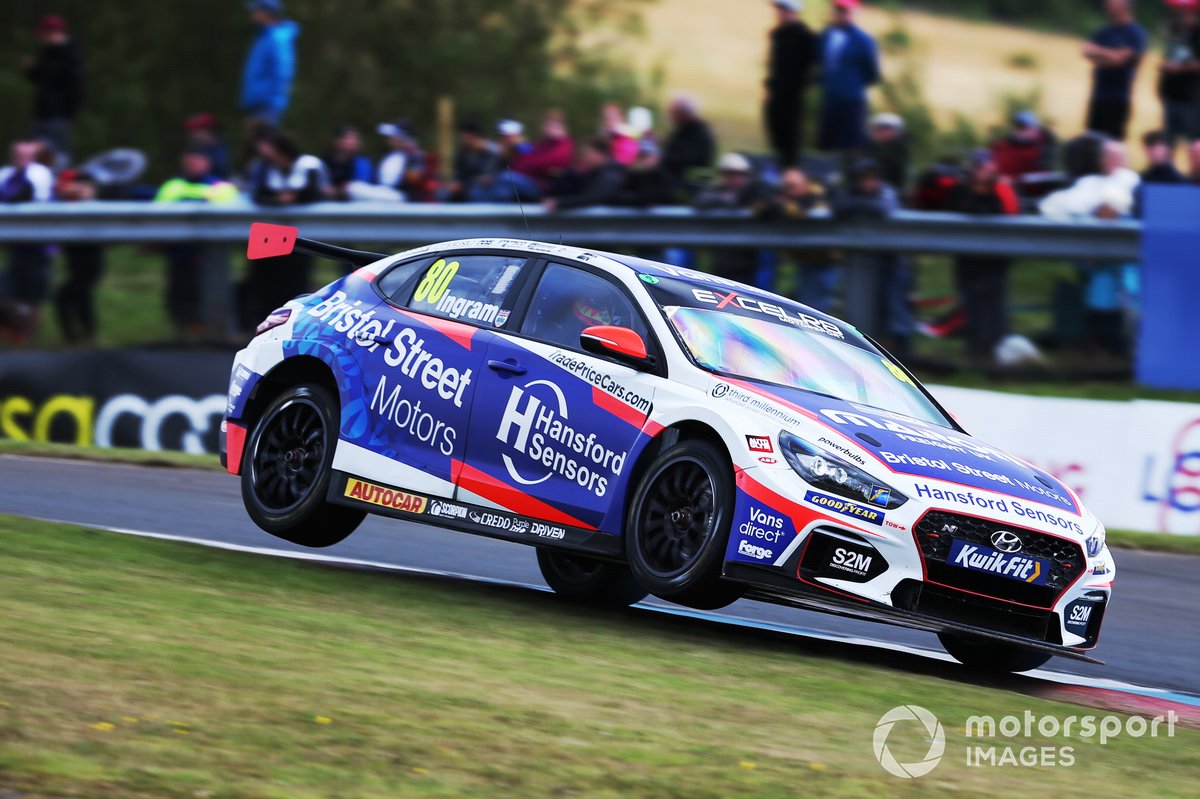 Behind Turkington, championship leader Tom Ingram had a lonely race once he’d passed Stephen Jelley on the opening lap to take fourth in his Excelr8 Motorsport Hyundai i30 N.

Jelley clung on to fifth for three quarters of the race, despite a massive gaggle breathing down the WSR BMW driver’s neck, but he finally cracked with a few laps remaining.

Behind Jelley, the top 10 was rounded out by Dan Cammish’s Motorbase Ford and Tom Chilton’s Excelr8 Hyundai.

Motorbase Performance BTCC squad and Mat Jackson split ahead of 2018