The Scot worked his way past polesitter Rob Austin (Handy Motorsport Toyota Avensis), who had dropped to second from the start after he was hit from behind, after two laps.

Moffat chopped into a 0.5s lead for Tom Ingram (Speedworks Motorsport Toyota Avensis). On lap five, Moffat powered alongside and ahead of Ingram going through Hollywood to seal a lead he would not lose.

"I knew I had a good car underneath me, and it seemed to switch on quicker than the others which gave me the edge.

"The car had a lot of traction and I knew that if I got alongside Ingram, with his [success ballast] weight and tyres, at the top of the Craners, I could make it stick.

"After that, I was looking in my mirrors and checking the gap, but there were yellow flags everywhere and I was praying that there wasn't a safety car.

"I was relieved to see the chequered flag." 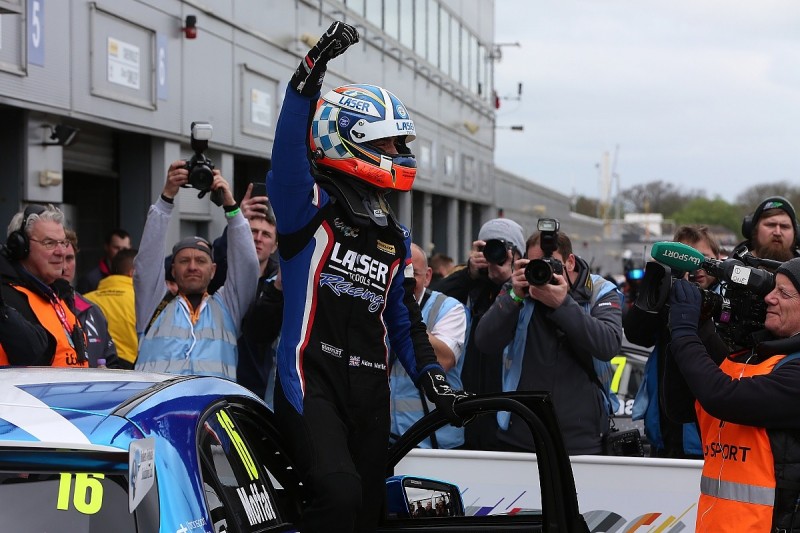 Ingram, on the harder tyres and with 66kg of success ballast, dropped back down as Austin muscled his way ahead and a train of cars followed him, with Matt Neal (Team Dynamics Honda Civic Type R) taking third and Colin Turkington (WSR BMW 125i M Sport) in fourth.

Neal tracked Austin and grabbed second place on lap 11 with a move down the inside into the Old Hairpin.

Austin held on for third place, with Turkington on his bootlid.

Ingram secured fifth despite his harder tyres and ballast, although he was under pressure throughout.

Over the latter stages, Rob Collard (WSR BMW 125i M Sport) tried his best to wrest the place but had to settle for sixth.

Morgan and Shedden followed him over the line but their positions were swapped post-race after Morgan picked up a 0.5-second penalty for passing the Honda on the grass.

Ash Sutton (Team BMR Subaru Levorg), who was stripped of pole position for an overboosting issue, raced from the back of the grid to 13th.