WSR driver Turkington carved his way through the field - which included a controversial push past long-time race leader Aiden Moffat to snatch first place - to clinch a fourth win of the season.

With title rival Ash Sutton finishing the race in 12th, there are now just six points between the two drivers with one race remaining.

Turkington advanced to 12th on the first lap and, having spent the next lap catching the lead bunch, profited from a squabble between Rob Austin's Handy Motorsport Toyota Avensis and the Team Dynamics Honda Civic Type R of Matt Neal to squeeze his BMW 125i M Sport into 11th.

The Northern Irishman then battled past Jack Goff on lap four, and Dave Newsham a lap later to advance to ninth, before picking up another position when Senna Proctor ran wide.

Turkington was in sight of the Team BMR Subaru Levorg of Sutton by the mid-distance after Neal had beaten Sutton through Paddock Hill, and engineered his way ahead of his rival a lap later.

Having tailed Sutton along the Brabham Straight, Turkington pushed the Levorg through Paddock Hill and, with Sutton unable to get across to cover the inside line, snaked his way ahead on the run to Druids. 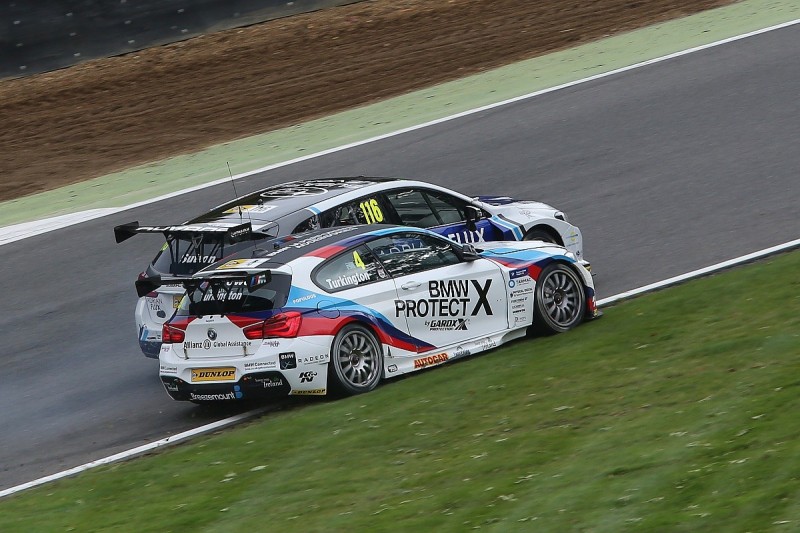 He then cleared the leading PMR Astra of Chilton, worked his way around the outside of Neal on the run to Hawthorn on lap 10 of 15, and cleared Tom Ingram at Clearways to move into fourth.

Gordon Shedden was Turkington's next victim before the two-time BTCC champion dived past Mat Jackson for second at Paddock Hill on lap 12, with a bump-pass on Moffat - the winner of Sunday's first race - completing Turkington's remarkable rise through the field.

"I've still got the fight," said Turkington, who also picked up a point for fastest lap.

"I wasn't expecting to make that much progress but the strategy was really good.

"I missed out on race one with the soft tyre but we had them there [with the soft] with no weight.

"Aiden was carrying full weight, he was driving a defensive car as he has every right to do.

"I was coming with so much more speed; the disparity between the two cars was so great."

Shedden and Neal completed the podium, with Jackson fourth ahead of Moffat after he slid wide.

Ingram's sixth place finish was enough to seal the Independents title with a race to spare.

Sutton dropped further down the order towards the end of the race and scored four points for 12th.

The pair will both contest Sunday's final race of the season on the hard compound tyre, with Turkington set to start 10th and Sutton 12th.