Having engaged in wheel-banging action with title rival Sergio Campana in race one, Sato was again forced to battle past a defensive Campana to earn his fourth victory of the season.

"I thought it was like yesterday, I wasn't very happy with some of the driving," said Sato. "On the pit straight Sergio moved over quite late and clipped my front wing. I had to brake on the straight.

"Anyway, my plan was to push to the maximum to finish ahead of Sergio, and we've won the race so it has been a good weekend."

The breakthrough for Sato arrived when Campana was wrong-footed trying to pass reversed-grid polesitter Roberto La Rocca on lap 12.

Campana had opted to pass the Auto GP debutant on the outside of Turn 2, while Sato correctly chose to duck inside, and dived past both drivers into Turn 3.

Once in clear air, Sato made his superior race pace count and extended an 8.5-second margin of victory over Vittorio Ghirelli at the chequered flag.

Ghirelli lost considerable ground to Sato boxed in behind La Rocca and Campana during the middle part of the race. The Super Nova driver snatched second place from Daniel de Jong three laps from home when the GP2 driver outbraked himself into the final chicane, setting up a successful passing move at Turn 1 on the following lap.

The field was reduced to 14 starters before the start when rookie Meindert van Buuren, who took victory on-the-road at the preceding round at Mugello, spun off at Turn 1 on the formation lap (pictured below). 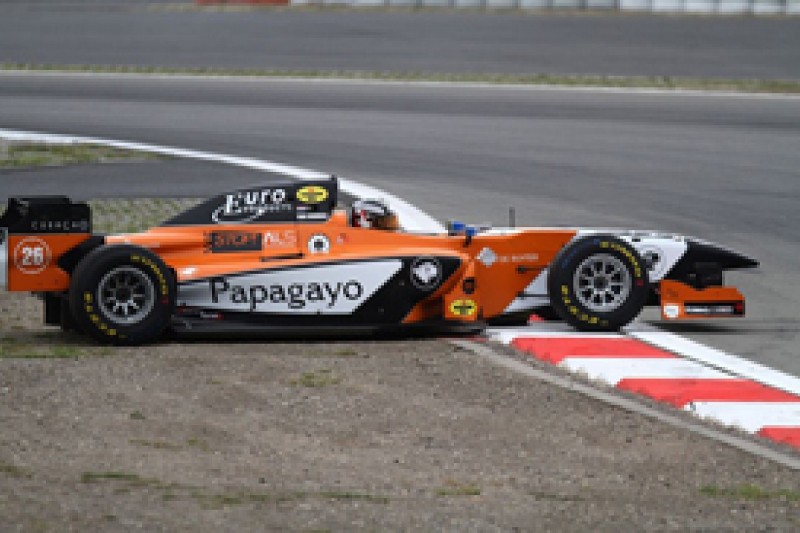 Behind fourth place finisher Campana, Karthikeyan battled back from his spin to take fifth position after enduring a prolonged fight with a determined La Rocca in the second half of the race.

Karthikeyan only stole the position from the Venezuelan on the start of the last lap, following a bold passing attempt on the outside of Turn 1.

La Rocca squeezed Karthikeyan onto Turn 1's outside kerb, before suffering a half spin at Turn 2 in a failed bid to run side-by-side with Karthikeyan on a tight line.

Giovesi's hopes of a podium ended when the Ghinzani Motorsport racer suffered an extremely lengthy pitstop. The Italian finished down in an unrepresentative 10th place.