Key to Karthikeyan's success was an early mandatory tyre, from which the Indian emerged in clear air and able to maximise his race pace.

"We always planned to stop early," said Karthikeyan. "I made a great start, but Campana came from nowhere at Turn 1. He dived on the inside and we made contact.

"After that the front-right corner felt a bit awkward, but fortunately there aren't too many left-hand corners here and I was able pull out a big lead at the end."

The win sets-up a four-way title decider at Brno in October. Starting from seventh, after finishing second in this morning's opener, Karthikeyan made an excellent start to jump into fifth place by the opening corner.

The Super Nova driver's progress was aided by a terrible getaway by front-row starter Tamas Pal Kiss, who immediately dropped to ninth.

Rookie van Buuren looked assured at the head of the field and eked out a one second lead over de Jong. In fact, van Buuren would not be passed on track during the race, only losing position during the pitstop phase.

Campana emerged from a late tyre change just two laps from home having also leapfrogged van Buuren during the pitstops.

The triple 2013 victor held the position by a slender margin, and was forced to defend his second position on cold tyres through the Craner Curves. Under pressure from van Buuren, the 2011 Italian Formula 3 champion ran off-track on the exit of the Old Hairpin, incurring a heavy blow to his championship aspirations. 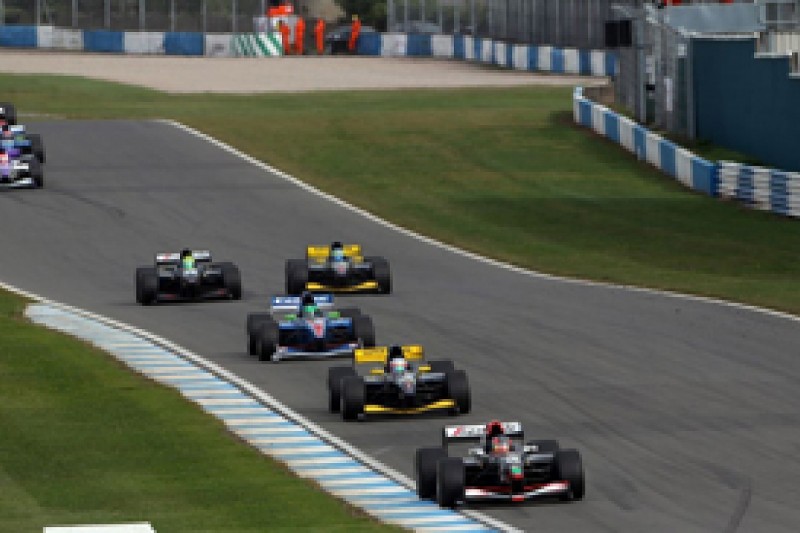 Campana slipped down to sixth as he rallycrossed back onto asphalt, falling behind Giovesi, Kimiya Sato and race one victor Vittorio Ghirelli.

Sato's eventual fifth place was a fine effort after a controlled display from last on the grid. The Japanese driver was forced to start from the rear of the field after posting race one's only retirement when he spun into the gravel at McLeans.

GP2 driver de Jong dropped out of contention when he suffered a severe delay during the change of his left-rear wheel, and would end a frustrating afternoon in the penultimate position.

Victories for Karthikeyan and Ghirelli at Donington this weekend have secured their Super Nova team victory in the teams' championship.